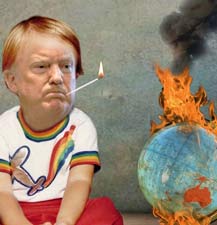 In the past two weeks, some stuff has happened:

— (By an amazing turn of events, Trump concurrently is facing an impeachment trial)

— Trump drew a clear red line by tweet-threatening Iran devastation, Iranian cultural site destruction (a violation of international law) if they respond to our assassination of their leader

— By the way, Pentagon said it will not attack Iranian cultural sites (which would be a violation of international law)

— Iran announced they were good now; as long as U.S. does not respond, they don’t want to escalate

— Trump tweeted “All is well,” made no mention of his red line threats

I don’t claim to know the proper response when a foreign adversary kills one of our military contractors in a foreign war zone. I imagine it involves complicated discussions and decisions depending upon circumstances. I do know that I don’t want a corrupt, incompetent, amoral commander in chief making those decisions for my country.

If I were in charge:

I do know I should think through carefully my decision to commit an act of war by assassinating our adversary’s top general (the equivalent to our secretary of defense).

I do know I should hesitate in drawing a clear red line if that adversary responds (which it’s sure to do) since I criticized my predecessor mercilessly for doing the same thing.

I do know I shouldn’t threaten a violation of international law (destroying Iranian cultural sites) without consulting the Pentagon, the State Department, and my legal team.

I do know I should coordinate with my secretary of state before he publicly denies that I did threaten a violation of international law (destroying Iranian cultural sites).

I do know I would look stupid undercutting my state secretary by reemphasizing my threat to violate international law (by destroying Iranian cultural sites) — especially now that I know what international law is.

I do know I would look stupider by not having coordinated with my Pentagon before it announces that it would not violate international law (by destroying Iranian cultural sites).

Speaking of my Pentagon, I do know I would look galactically stupider after it announces detailed military departure plans to honor Iraq’s vote to expel our troops, but then I order my Pentagon to say, “Oops, I guess we’re staying; we made a mistake.”

And after said adversary indeed crosses my red line and conducts a measured response to my assassination of their top general (the equivalent to our secretary of defense), I do know I would look weak — and stupid — by tweeting, “All is well.”

Come to think of it, I would know that it’s stupid, juvenile, incompetent, and ineffectual to be tweeting foreign policy — or any policy — announcements at all.

Finally, I do know that I would look colossally petty and pathological 1) by conjuring up the non sequitur-ious lie during my speech to the nation that Barack Obama funded Iran’s missile system through the “foolish” Iran nuclear deal (from which my pulling out has caused this entire foreign policy debacle), and 2) by demonstrating that (as pundit Chris Matthews noted) I have a “kind of Tourette’s” when it comes to Obama — I can’t get through a day without some crude, false criticism of the former president that good and smart people wish were still in office and to whom I could never hold a candle.

“Look at you — even David Crosby thinks you let yourself go!” (— Triumph the Insult Comedy Dog, to a rotund Rob Reiner at a Comedy Central roast)

On Tuesday, Democratic presidential front-runner Joe Biden criticized President Trump’s handling of the growing tensions with Iran as employing a “haphazard” decision-making process and offering “tweets, threats, and tantrums” that expose Donald to be “dangerously incompetent and incapable of world leadership.”

Of course, Democrats will criticize Trump.

But wait: Even the usually reliably sycophantic Sen. Rand Paul (R-Ky.) says Donald is a “feckless” cretin when it comes to Iran policy.

“Republican Kentucky Sen. Rand Paul slammed President Donald Trump’s strike on Iranian Gen. Qasem Soleimani during an appearance on Fox News Tuesday. ‘I hate this. [It is the death of diplomacy.] I hate that this is where we are going,’ Paul said on air. ‘I have been someone who has been for engagement, but there was much less killing, there was much less violence after the Iran agreement. In fact, there was a lull, a period in which I think we were headed towards a much more stable situation with Iran, and now I think that’s gone. And I think it may be gone for a lifetime. [It is] much more likely [Americans will be attacked.]’

“‘[Instead,] we placed an embargo where Iran was not allowed to sell any goods internationally, including their main export of oil. An active embargo is like an act of war. To top that off, we’ve now killed one of their major generals,’ [said the senator.]

“This comes after Paul criticized ‘feckless intermittent eruptions of violence w/ no clear mission for our soldiers’ on Twitter following the strike.”

1/2/2020 — House Speaker Nancy Pelosi continues to delay transmitting articles of impeachment to Senate, holding out for Senate commitment to a fair trial with witnesses

1/2/2020 — FBI releases trove of Mueller report Interviews, including those related to former White House Counsel Don McGahn that confirm Trump DID order McGahn to fire Mueller, then illegally directed McGahn to cover up that failed order