Hillary Cleared of EVERYTHING by Trump’s DOJ, Nobody Cares 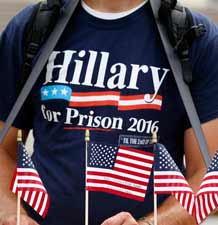 You might have missed the real news of this week.

No, it wasn’t Trump’s reckless unwarranted assassination of an Iranian top leader and the aftermath: Iran’s accidental killing of 176 civilians aboard a Ukrainian airliner, which never would have happened except for the aforementioned reckless unwarranted assassination of an Iranian top leader. No, it wasn’t House Speaker Nancy Pelosi’s (D-Calif.) game of impeachment chess with Senate Majority Leader Mitch McConnell (R-Ky.). (Pelosi won.) No, it wasn’t Donald’s most recent lie justifying the Gen. Soleimani assassination: that Soleimani was planning attacks on four U.S. embassies — never mind that Trump’s own defense secretary said he had seen no intelligence to this effect and the embassies never were warned.

No, it wasn’t the new evidence that Russia hacked the Ukrainian company Burisma Holdings in an attempt to help the Trump campaign get dirt on Joe and Hunter Biden. No, it wasn’t the release of a trove of new evidence (if you really needed more) connecting Donald directly to the Trump-Ukraine extortion plot: Rudy Giuliani’s indicted associate Lev Parnas’ phone and document contents apparently contain “damning” evidence further implicating Mr. Big (aka “No. 1,” aka “The Donald”) by elucidating his (small-) hands-on direction of the illegal scheme.

No, it wasn’t the House vote to end its holdup and send impeachment articles over to the Senate after having achieved the following through delay: 1) blocked GOP Senate Leader McConnell’s attempt to have the lame-duck Senate vote for an immediate dismissal of articles; 2) provided time for several GOP senators to become ready to vote for witnesses; 3) allowed John Bolton time to agree to testify; and 4) allowed time for the emergence of more damning evidence against Trump with the likelihood of more down the road.

Finally, no, it wasn’t even the blockbuster Rachel Maddow (MSNBC) interview with the aforementioned indicted Giuliani associate Lev Parnas. Lev shook the Trumpian universe last night attesting to these allegations: 1) he worked directly for Giuliani who worked directly for Trump, and Trump knew everything every step of the way about Parnas’ efforts to get Ukraine to announce a Biden investigation or it would get no aid, no visits, and no U.S. relationship or support; 2) as Ukraine resisted Donald’s strong-arming, its aid was held up, it lost a planned Trump meeting in Poland, and it lost VP Pence’s attendance at the new Ukrainian president’s inauguration; 3) all the many meetings Parnas had with Ukrainian officials started out with Giuliani on speakerphone confirming that Parnas spoke directly for Trump; 4) VP Mike Pence, AG Bill Barr, and NSA John Bolton all knew the illegal extortion plot was going on; 5) Rep. Devin Nunes (R-Calif.) was involved in the scheme; 6) Parnas personally witnessed Trump ordering the firing of ambassador to Ukraine Marie Yovanovitch.

Yes, that is all news. But not the news.

Real News of the Week

No, the biggest news of the week, which you likely missed in the avalanche of other political headlines, was that Hillary Clinton was cleared of all legal charges and (transparently false) accusations from Trump World related to her infamous emails, so-called Uranium One scandal, Clinton Foundation hanky-panky, and anything else ever thrown at her.

“Who cleared her, the ACLU?” you might be thinking with snotty, holier-than-thou indignation and MAGA disbelief. Look no further than the Trump administration Department of Justice under Attorney General Bill Barr:

“A Justice Department inquiry launched more than two years ago to mollify conservatives clamoring for more investigations of Hillary Clinton has effectively ended with no tangible results, and current and former law enforcement officials said they never expected the effort to produce much of anything. …

(Barrett, Devlin & Zapotosky, Matt; “Justice Dept. Winds Down Clinton-Related Inquiry Once Championed by Trump. It Found Nothing of Consequence.”; The Washington Post; 1/9/2020.)

Lest you think the deep state is so strong, so insidious that it can manipulate the career professionals at Justice and the FBI, note that this open-ended, catch-all investigation was prompted by Trump and his allies and initiated by Attorney General Jeff Sessions (R-Ala.). At that time Sessions was under fire from Trump for recusing himself from the Russia investigation. Trump’s AG would’ve bent over backward, sideways, or forward to get back in the boss’ good graces.

Then the investigation came under the auspices of an interim attorney general and hand-picked Trump puppet, the galactically unqualified Matt Whitaker, who pushed the Hillary investigators to be more aggressive under his three-month watch.

Finally, oversight of the Clinton investigation fell to new Attorney General William Barr who is believed widely to be the (deceased shady former Trump-protecting lawyer) “Roy Cohn” Donald always has pined for in an AG. Barr has come under intense scrutiny for lack of independence from, and total deference to, the Trump White House. Barr long has thought Clinton was culpable in the made-up Uranium One scandal. Ultimately even AG Barr would not, could not stop the exculpatory report by his investigators that declared Hillary Clinton innocent of everything. Everything.

(By the way, Trump’s own State Department already had cleared Hillary in October 2019 of any wrongdoing or intended wrongdoing surrounding her email brou-ha-ha while she was secretary of state.)

Hillary Clinton has been cleared of all charges and accusations — ever made by Trump World — by Donald’s own Justice Department.

It infuriates me that this is not big news. It infuriates me that it will not change the false beliefs of MAGA cultists or independent low-information voters who bought it hook, line, and comb-over. They’ve heard the lies so often and for so long, “There must be something to it.”

For all you low-information voters who never looked beyond the Trumpian disinformation — the incessant, voluminous high-volume disinformation — How would your 2016 presidential vote have changed knowing (and accepting) Donald had lied?

For all you independents who believed “both sides are just as bad so let’s shake things up and vote for an outsider” — How would your 2016 presidential vote have changed knowing he had lied?

For all you apathetics who chose to stay home “out of principle” or voted third party because neither candidate “excited” you — How would your 2016 presidential voting behavior have changed knowing he had lied?

For all you deplorables that simply liked the guy who spits in the eye of competence, intelligence, experience, and morality — well you’re still a lost cause.

How Did He Do It?

It takes a colossal ethical deficit to lie brazenly and unceasingly. Many people can’t accept that someone could be that morally bereft, so they believe the lies or at least attribute equal weight to them. Donald Trump and his Republican Party are that morally bereft. Now that you know, What are you going to do about it?

The simple fact is that Democrats, as a group, don’t have the ethical paucity to pull off the obvious, unceasing mendacity it takes to support a confidence artist as their party leader. And that kind of mendacity is near-impossible to combat, especially in the digital media age. It’s not that Trump and the current GOP are brilliant manipulators of message. No, any idiot with a media platform can do it. It only requires a hole in your soul where character is supposed to live.■