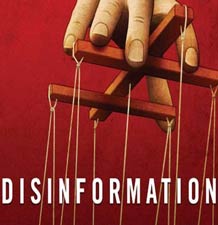 The unimaginable horror of a Trump reelection is becoming imaginable. Trump’s primary weapon is disinformation — $1 billion worth — and character-assassination-retaliation against anyone, friend or foe, who deviates from the White House disinformation script. Communications scholars call it “censorship through noise.” The autocrat no longer needs to repress the heretical truth-teller. He simply drowns her out with wave after wave of disinformative noise. Thinking people know how the process works and see through it. But this weapon still could reelect Donald and damage functional understanding of knowledge for many decades. How do we fight it? All who care about ethical government and truth must commit to supporting both. They must speak. They must participate in the rhetorical fight or lose what they hold dear, what many take for granted. “Safeguard or surrender. You choose.” (— Chuck Rosenberg) (scroll down for full article)


“Safeguard or surrender. You choose.”

(Rosenberg, Chuck, former U.S. attorney, former senior FBI official; “This Is a Revolting Assault on the Fragile Rule of Law”; The Washington Post; 2/12/2020.) (referring to the current attacks on DOJ independence through illicit influence by the president and attorney general to help Trump friends and persecute Trump enemies)

The Donald Trump presidential freak show in the days after his impeachment acquittal has critical thinkers terrified and MAGA cultists jubilant. Diametrically contrary to GOP senators’ empty assurances that after being impeached, “President Trump has learned his lesson,” Donald is more emboldened than ever to abuse the presidency and commit crimes to get reelected.

The president is firing administration employees who did nothing more than testify truthfully before Congress under subpoena. Many others have resigned in protest or out of fear. He’s drawn his protector Attorney General William Barr ever-closer, directing Barr to take hands-on control of all formerly independent Department of Justice investigations and cases concerning Trump or Trump enemies. Multiple Justice prosecutors have resigned, objecting to Barr’s obsequious interference to favor the president. Note that the separation of White House and DOJ has been sacrosanct since the Nixon-Watergate-Attorney-General-John-Mitchell suite of crimes was uncovered in the 1970s.

The unimaginable horror of a Trump reelection is becoming imaginable.

Trump’s primary weapon is disinformation — $1 billion worth — and character-assassination-retaliation against anyone, friend or foe, who deviates from the White House disinformation script. According to McKay Coppins, communications scholars call it censorship through noise. The autocrat no longer needs to repress the heretical truth-teller. He simply drowns her out with wave after wave of disinformative noise. Thinking people know how the process works and see through it. But this weapon still could reelect Donald and damage functional understanding of knowledge for many decades. How do we fight it?

We might not have the complete solution to this quandary yet. But all who care about ethical government and truth must commit to supporting both. They must speak. They must participate in the rhetorical fight or lose what they hold dear, what many take for granted.

“Safeguard or surrender. You choose.”

Journalist McKay Coppins has written a comprehensive piece in The Atlantic explaining the origins and mechanics of the Trump propaganda machine. I’ve decided a good use of my time this week is to offer extensive highlighted sections of his article for educational purposes. It certainly enlightened me. Coppins tosses around various Democratic strategists’ ideas for overcoming insidious, massive disinformation campaigns. He writes that it appears the best hope in the long run is forcing social media companies to take legal responsibility for accuracy in political posts, as they already must with standard corporate advertising. But obviously, this won’t happen under a Trump GOP administration.


Excerpts From “The Billion-Dollar Disinformation Campaign to Reelect the President” (by Coppins, McKay; The Atlantic; 2/10/2020)

What I was seeing [from the Trump campaign] was a strategy that has been deployed by illiberal political leaders around the world. Rather than shutting down dissenting voices, these leaders have learned to harness the democratizing power of social media for their own purposes — jamming the signals, sowing confusion. They no longer need to silence the dissident shouting in the streets; they can use a megaphone to drown him out. Scholars have a name for this: censorship through noise.

After the 2016 election, much was made of the threats posed to American democracy by foreign disinformation. Stories of Russian troll farms and Macedonian fake-news mills loomed in the national imagination. But while these shadowy outside forces preoccupied politicians and journalists, Trump and his domestic allies were beginning to adopt the same tactics of information warfare that have kept the world’s demagogues and strongmen in power. …

Both parties will have these tools at their disposal. But in the hands of a president who lies constantly, who traffics in conspiracy theories, and who readily manipulates the levers of government for his own gain, their potential to wreak havoc is enormous.

The Trump campaign is planning to spend more than $1 billion, and it will be aided by a vast coalition of partisan media, outside political groups, and enterprising freelance operatives. These pro-Trump forces are poised to wage what could be the most extensive disinformation campaign in U.S. history. Whether or not it succeeds in reelecting the president, the wreckage it leaves behind could be irreparable. …

[I]n the Trump era, an important shift has taken place. Instead of trying to reform the press, or critique its coverage, today’s most influential conservatives want to destroy the mainstream media altogether. “Journalistic integrity is dead,” [Breitbart editor Matthew] Boyle declared in a 2017 speech at the Heritage Foundation. “There is no such thing anymore. So everything is about weaponization of information.”

It’s a lesson drawn from demagogues around the world: When the press as an institution is weakened, fact-based journalism becomes just one more drop in the daily deluge of content — no more or less credible than partisan propaganda. Relativism is the real goal of Trump’s assault on the press, and the more “enemies of the people” his allies can take out along the way, the better. “A culture war is a war,” [former Trump aide] Steve Bannon told the Times last year. “There are casualties in war.” …

It doesn’t require an overactive imagination to envision a worst-case scenario: On Election Day, anonymous text messages direct voters to the wrong polling locations, or maybe even circulate rumors of security threats. Deepfakes of the Democratic nominee using racial slurs crop up faster than social media platforms can remove them. As news outlets scramble to correct the inaccuracies, hordes of Twitter bots respond by smearing and threatening reporters. Meanwhile, the Trump campaign has spent the final days of the race pumping out Facebook ads at such a high rate that no one can keep track of what they’re injecting into the bloodstream.

After the first round of exit polls is released, a mysteriously sourced video surfaces purporting to show undocumented immigrants at the ballot box. Trump begins retweeting rumors of voter fraud and suggests that Immigration and Customs Enforcement officers should be dispatched to polling stations. “ARE ILLEGALS STEALING THE ELECTION?” reads the Fox News chyron. “ARE RUSSIANS BEHIND FALSE VIDEOS?” demands MSNBC.

The votes haven’t even been counted yet, and much of the country is ready to throw out the result. …

There is perhaps no better place to witness what the culture of disinformation has already wrought in America than a Trump campaign rally. …

After the [November 2019 Tupelo, Mississippi,] rally, I loitered near one of the exits, chatting with people as they filed out of the arena. Among liberals, there is a comforting caricature of Trump supporters as gullible personality cultists who have been hypnotized into believing whatever their leader says. The appeal of this theory is the implication that the spell can be broken, that truth can still triumph over lies, that someday everything could go back to normal — if only these voters were exposed to the facts. But the people I spoke with in Tupelo seemed to treat matters of fact as beside the point.

One woman told me that, given the president’s accomplishments, she didn’t care if he “fabricates a little bit.” A man responded to my questions about Trump’s dishonest attacks on the press with a shrug and a suggestion that the media “ought to try telling the truth once in a while.” Tony Willnow, a 34-year-old maintenance worker who had an American flag wrapped around his head, observed that Trump had won because he said things no other politician would say. When I asked him if it mattered whether those things were true, he thought for a moment before answering. “He tells you what you want to hear,” Willnow said. “And I don’t know if it’s true or not — but it sounds good, so f*** it.”

The political theorist Hannah Arendt once wrote that the most successful totalitarian leaders of the 20th century instilled in their followers “a mixture of gullibility and cynicism.” When they were lied to, they chose to believe it. When a lie was debunked, they claimed they’d known all along — and would then “admire the leaders for their superior tactical cleverness.” Over time, Arendt wrote, the onslaught of propaganda conditioned people to “believe everything and nothing, think that everything was possible and that nothing was true.”

Leaving the rally, I thought about Arendt, and the swaths of the country that are already gripped by the ethos she described. Should it prevail in 2020, the election’s legacy will be clear — not a choice between parties or candidates or policy platforms, but a referendum on reality itself.

(Coppins, McKay; “The Billion-Dollar Disinformation Campaign to Reelect the President”; The Atlantic; 2/10/2020.)