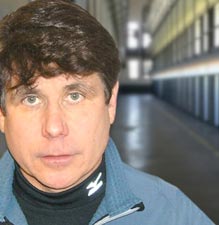 By Monday, President’s Day, over 2 thousand former Department of Justice prosecutors and other officials had affixed their names to a letter calling for Attorney General William Barr to resign over his unethical interference in DOJ matters related to the president. That’s “thousand” — with a “T”! This is unprecedented. The AG’s most recent, protest letter-precipitating conduct comprised quashing the work of four prosecutors involved in the case of presidential bud Roger Stone. The four attorneys resigned the case in protest — one quit the DOJ outright. Now get this: The day after Trump released him from prison, the corrupt former Illinois governor showed zero remorse for attempting to sell — for cash — Barack Obama’s old Senate seat in 2009. Rod Blagojevich (“D”) called himself a “political prisoner” and now a “Trumpocrat” who will vote for Donald. Can the Trump-pardon circus get any more disgusting? Can one’s stomach be turned any further? That’s “thousand” — with a “T”! (scroll down for full article)


There are three primary topics of news coverage this week: 1) Trump-Barr-DOJ interference; 2) Trump’s indiscriminate, politicized pardons; and 3) the Democratic primary. Let’s touch on each.

By Monday, President’s Day, over 2 thousand former Department of Justice prosecutors and other officials had affixed their names to a letter calling for Attorney General William Barr to resign over his unethical interference in DOJ matters related to the president. That’s thousand — with a “T”! This is unprecedented. The AG’s most recent, protest letter-precipitating conduct comprised quashing the work of four prosecutors involved in the case of presidential bud Roger Stone. After they presented their sentencing recommendation (seven to nine years in prison, based on long-standing, tougher Trump Justice Department guidelines), which Donald then tweet-bashed, Barr intervened to lower that recommendation drastically. The four attorneys resigned the case in protest — one quit the DOJ outright. Hence the letter with 2 thousand-plus signatures.

This is only the latest outrage. Thank God for dedicated investigative journalists who have exposed Barr’s Trump-protecting corrupt interference in DOJ matters since he was confirmed a year ago Valentine’s Day: 1) sabotaging and falsely discrediting the Mueller investigation; 2) shutting down the Michael Cohen, Trump Organization hush money probe into keeping Donald’s paramours quiet before the 2016 election; 3) shutting down the investigation into fraudulent spending and other financial funny business by the Trump inaugural committee; 4) aborting the probe of Trump attorney Rudy Giuliani after Giuliani associates Lev Parnas and Igor Fruman were indicted for campaign finance fraud and other crimes; 5) changing (lowering) the sentencing recommendation for convicted former Trump National Security Adviser Michael Flynn; and the many we don’t yet know about.

On a lighter note, it appears Sen. Susan Collins might have erred when she said “I believe that the president has learned from [his impeachment.] … I believe that he will be much more cautious in the future.”

“During his Senate impeachment trial, Democrats repeatedly asserted that President Trump is ‘not above the law.’ But since his acquittal two weeks ago, analysts say, the president has taken a series of steps aimed at showing that, essentially, he is the law. …

“More than 2,000 former Justice Department employees signed a public letter this week objecting to Trump’s public intervention in the case of his longtime friend Roger Stone, and urging Barr to resign. The head of the Federal Judges Association has called an emergency meeting to address growing concerns about political interference in the Stone case. And four prosecutors resigned from the case last week after Trump publicly decried their recommended prison sentence of seven to nine years for Stone and the Justice Department reversed course to lobby for a lower sentence. …

“Though Barr has warned that the president’s unbridled commentary about ongoing criminal cases was making it ‘impossible for me to do my job,’ Trump continued to express his views about legal matters Tuesday. Trump told reporters that he partially agreed with Barr, acknowledging that his tweets do make the attorney general’s job more difficult. But he said he would continue tweeting nonetheless. ‘Social media, for me, has been very important because it gives me a voice,’ Trump said.”

“You know oftentimes, pretty much all the time, I really rely on the recommendations of people that know them.”

“Of course, an appearance on The Apprentice (Rod Blagojevich), a $10 million Trump fundraiser haul (Michael Milken), or $200,000 in donations to me and my party (Paul Pogue) can’t hurt. And I’ve got a soft spot for fellow corrupt businessmen — especially the poor bastards who got caught.” (— writer’s embellishment)

Last Tuesday, President Trump pardoned or bestowed clemency to a few more high-profile, white-collar, white-male rich corrupt politicians and businesspeople: in other words, guys like him. And if you appeared on his “reality” TV show, all the better.

“By this point, it’s no secret that President Trump’s pardons have been significantly more self-serving than those of other presidents. While his predecessors have lodged controversial pardons — no question — Trump is simply on another level. Not only has he pardoned his allies, but he has often pardoned people who cozy up to the powerful people around him, whether via Fox News or some other method. But there’s another key aspect of Trump’s pardons that shouldn’t get lost: In many cases, there are significant similarities between the pardon recipient and Trump — or at least Trump’s depiction of himself.

“Trump suggested that the phone call on which [Gov. Rod] Blagojevich was caught talking about selling an appointment to the U.S. Senate wasn’t actually bad. ‘He’s been in jail for seven years over a phone call where nothing happens — over a phone call which he shouldn’t have said what he said, but it was braggadocio, you would say,’ Trump said in early August. ‘I would think that there have been many politicians — I’m not one of them, by the way — that have said a lot worse over the telephone.’ The irony of that comment wasn’t known at the time, but it practically slaps you in the face today. …

“[T]he Blagojevich commutation and the dual billionaire pardons Tuesday drive home the idea that Trump may sometimes see himself in these pardons. That’s too much coincidence for one day. Trump has maintained before that he has the ‘absolute right’ to pardon himself if need be. He kind of already has.”

And get this: The day after he was released from prison, the corrupt former Illinois governor showed zero remorse for attempting to sell — for cash — Barack Obama’s old Senate seat in 2009. Rod Blagojevich (“D”) called himself a “political prisoner” and now a “Trumpocrat” who will vote for Donald If he’s allowed to vote. Can the Trump-pardon circus get any more disgusting? Can one’s stomach be turned any further?

On a lighter note, the president continues to persecute patriots, like Lt. Col. Alexander Vindman and other administration officials who answered their subpoenas and spoke the truth before Congress. And the whistleblower. And Joe Biden. And Mitt Romney. And any former administration official who speaks truth about Donald’s corruption, incompetence, and amorality.

Yeah, I’m worried. I love Bernie Sanders, who has surged to the lead, but can he beat Trump? I like Michael Bloomberg’s commitment to spend some of his billions to elect a Democratic president even if it’s not him. But should a former Republican New York City mayor be able to buy a Dem nomination? And can he beat Trump, especially now that past misogynistic and racist remarks are out? I also love Elizabeth Warren, but she’s slumping in the polls. And speaking of slumping polls, I continue to believe Joe Biden’s our best shot, but does he still have it? He looked good at last night’s debate but so did all the others (except Mike).

I’ll keep up my civic engagement by reading, speaking, writing, donating, and voting. After that: Que, sera, sera. All I can do is speculate and hope that the universe could not be so cruel as to give us a second Trump term.

Here’s a snapshot of the race:

“Sen. Bernie Sanders (I-Vt.), on the strength of his performances in Iowa and New Hampshire, has surged nationally and now holds a sizable lead over all of his rivals for the Democratic presidential nomination, according to a Washington Post-ABC News poll.

“Former Vice President Joe Biden, who led Sanders in a Post-ABC national poll in January, has seen a sharp drop in his support after finishing fourth in the Iowa caucuses and fifth in the New Hampshire primary. Biden is now in a battle for second place with former New York mayor Mike Bloomberg and Sen. Elizabeth Warren (D-Mass.). Former South Bend, Ind., mayor Pete Buttigieg, who won the state-delegate-count battle in the Iowa caucuses and came a close second to Sanders in New Hampshire, is in single digits nationally, roughly even with Sen. Amy Klobuchar (D-Minn.), whose surprise third-place finish in New Hampshire further scrambled the Democratic contest. …

“Looking ahead to November, the poll tested six Democrats in hypothetical general-election matchups. Biden, Sanders, and Bloomberg fare best, edging Trump by five to seven points, with Trump receiving 45% support against each. Buttigieg, Klobuchar, and Warren are within the margin of error of Trump in these measures. Across all matchups, Trump is in a similar position as January but better off than last October.

In other prominent polls, the numbers in key battleground states show Biden beating Trump by the largest margins, peaking at 8%. The other four top Democrats also beat the president, though by lesser margins. Many analysts believe these states are the key to Trump’s defeat and that a non-Biden candidate might not sufficiently drive enthusiasm and turnout.