Trump Doesn’t Own the CDC — Yet 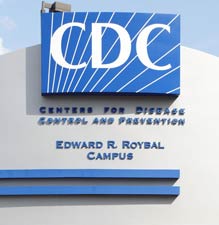 President Trump purports huge bragging rights for U.S. stock market performance. In his mind, the market IS the economy. To him, the daily Dow Jones Industrial Average is his identity, his plea for us to believe he’s a good president helping all Americans, in spite of reality. Donald’s lies are an obvious joke. They are a pathetic device to prop up a little man. And they can cause great harm. The coronavirus pandemic is steering Trump’s presidential lies in a deadly direction. He’s dissembling about its effects, to try to stop his precious market numbers from hemorrhaging. Lives will be lost. Trump owns the Senate, DOJ, EPA, Education and Energy Departments, and other Cabinet agencies. He’s installing non-experienced sycophants at the top of the intelligence community. The Trump HR department has been ordered to seek out and cleanse the administration of anyone neutral about the president, let alone not pathologically loyal. Fortunately, he does not own the truth-telling CDC — yet. (scroll down for full article)


President Trump purports huge bragging rights for U.S. stock market performance. In his mind, the stock market is the economy. Never mind that myriad economic experts believe a president has minimal effect on the economy. Never mind that in measuring the last three years of each president’s time in office, Barack Obama beats Donald Trump on several primary economic indicators including: 1) average monthly job growth; 2) unemployment rate decrease; and 3) real wage growth. And never mind that about half of all Americans are disconnected from the market by virtue of no 401(k), 403(b) participation or other stock investments. But to Donald, the daily Dow Jones Industrial Average is his identity, his plea for us to believe he is a good president helping all Americans, in spite of reality.

Donald’s lies are an obvious joke. They are a pathetic device to prop up a little man. And often they have the potential to cause great harm (notwithstanding their greatest inherent harm: they put and keep him in office.) The coronavirus pandemic is steering Trump’s presidential lies in a deadly direction. He’s already dissembling about the effects of the virus on America, to try to stop his precious market numbers from hemorrhaging. He’s already backed himself into a corner with indiscriminate cuts to the National Institutes of Health and other government health and science departments, including firing the U.S. pandemic response team in 2018. Lives will be lost.

Fortunately, the doctors, experts, and scientists at the Centers for Disease Control and Prevention have not gone Trump prostrate. So far, against Trumpian prevarication, the CDC is holding its own, telling the truth. The question remains who will win the ultimate rhetorical tug of war — David or Goliath.

Trump has become a virtual cult leader. No individual or entity dares cross him, dares tell the emperor he has no clothes, because of the power he has amassed through his followers’ blind emotional loyalty. As an elected official, stray one inch from the party line and you’ll chance being primaried. As a rich supporter, disrespect or disagree with The Donald and you’ll be shut out of money-making opportunities and shunned at the club — and tweet-attacked.

Donald Trump owns the Senate, Justice Department, Environmental Protection Agency, Education Department, Energy Department, and other Cabinet agencies. He’s buying up much of the intelligence community by installing non-experienced sycophants at the top. The Trump HR department has been ordered to seek out and cleanse the administration of anyone neutral about the president, let alone not pathologically loyal.

Fortunately, he does not own the CDC — yet.

Donald was already getting nervous about his precious stock market numbers, which he lives and dies by, which are his political identity.

“[T]he coronavirus is very much under control in the USA …  Stock Market starting to look very good to me.”

This tweet came about an hour after the U.S. stock market closed Monday and the Dow Jones Industrial Average had plunged 1,032 points (3.56%), its second-largest one-day point drop in 124 years of existence. The drop was near-unanimously attributed to the current news of a coronavirus pandemic, and specifically to fears that the Trump administration is desperately incapable of managing it in this country. As mentioned, Donald fired the U.S. pandemic response team in 2018 and has consistently cut funds to agencies that deal with health and science.

If we didn’t already know what a fabulist he is, this tweet would have caused Trump’s mental stability to come under heavy scrutiny. (Oh wait — it already is.)

“[The coronavirus outbreak is] under control [and is going to] go away. We have very few people with it. The people are getting better, they’re all getting better. … I think that the whole situation will start working out.”

Oops. The Dow dropped another 879 points that day.

“The rosy sheen that Trump, [Larry] Kudlow and other White House officials have tried to express about the economic impact of the coronavirus outbreak has now collided with reality: The coronavirus is spreading, quickly, to more countries. The death toll is rising, and the outbreak is wreaking havoc on global supply chains. …

“The White House’s assurances also fell flat on Capitol Hill, as lawmakers from both parties expressed outrage at the Trump administration’s seeming unfamiliarity with facts about the scale of the problem.”

The administration is doing everything possible to protect the stock market, Donald’s self-perceived report card, even at the expense of public safety.

“This White House may already be in danger of losing the capacity to be seen as serious.”

No argument here. And this doesn’t apply only to the coronavirus threat. To paraphrase what many pundits have declared: We’re not “in danger” of having a White House that can’t be taken seriously. We’re there. We’ve been there for a long time.

“President Trump on Wednesday attacked CNN and ‘MSDNC (Comcast)’ — a reference to MSNBC — for ‘doing everything possible to make the Caronavirus look as bad as possible, including panicking markets, if possible.’ (He misspelled coronavirus in his tweet.) ‘Likewise their incompetent Do Nothing Democrat comrades are all talk, no action,’ Trump added. ‘USA in great shape!'”

Finally, we have the inevitable. You have to ask, What took him so long? The president now is blaming the media and Democrats for stoking coronavirus fears to hurt him and his stock market.

“Now there are more than 50 people in the United States with coronavirus, and health officials believe the number will continue to grow. On Tuesday, as the stock market began its second day of a precipitous slide, Nancy Messonnier, a top CDC official, told reporters that the coronavirus’s impact on the United States ‘may seem overwhelming and that disruption to everyday life may be severe.’ She said that it was inevitable the virus would spread more broadly in the United States and that people needed to begin taking precautions. …

“Now, White House officials’ efforts to contain the economic fallout from the coronavirus have created new political hazards, as they publicly play down the threat while other federal officials with a background in health and diseases are warning of more severe consequences for inaction. The administration also risks creating new health hazards, should the pressure to assure investors of economic stability undercut its public health message about the mounting threat.”

So far, he doesn’t own the CDC.

“We already know Trump views the markets as a kind of backup gauge of his chances of reelection. But now, with markets tumbling, Trump has persuaded himself that warnings from his own administration’s health officials about the public threat it poses to Americans are to blame for those market travails. … The core absurdity of Trump raging at the media for hyping coronavirus is that his own officials are describing it in terms Trump won’t acknowledge. He doesn’t want them to publicly do this, because it influences his leading gauge of his political health. …

“If the media reports facts about coronavirus that Trump fears will damage him politically, or if officials follow procedures ensuring accountability in government — as the whistleblower and officials who testified to Congress about the Ukraine scheme did — [Trump purports] these things can only constitute corruption in their own right, that is, corrupt plots against Trump. All this justifies any and all [of his] efforts to corrupt government [that] Trump undertakes on his own behalf. [His M.O. is] everyone is corrupt. All that matters is who wins or loses.”

Trump doesn’t own the CDC.

“I think the financial markets are very upset when they look at the Democrat candidates standing on that stage making fools out of themselves.”

Last night, President Trump took to the podium for only his second formal White House news conference. He stated, among other things:

— The coronavirus outbreak probably will not affect the U.S., which is “very, very ready” for it.

— Mike Pence (someone with no public health experience, and even a negative record of reacting to the HIV outbreak while Indiana governor) will be placed in charge of coordinating the government’s response to the coronavirus outbreak.

— The Democratic candidates’ debate comments on Wednesday caused the stock market’s 2,000-point crash over the previous Monday and Tuesday.

“We do expect more cases.”

“It’s possible this could be an instance of community spread of COVID-19.”