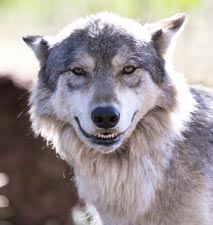 President Trump is the boy who cried “No Wolf.” He’s played down the crisis consistently for venal, self-serving purposes. Now that reality has slapped him upside the head, and he’s realized he can’t tweet-intimidate a virus into submission with junior high ad hominems, the boy has been forced to cry “Wolf!” Because the wolf now is snarling at his feet, tearing away the boy’s chances for reelection. And the boy knows reelection loss equals presidential immunity loss equals multiple indictments slapped on him at 12:01 p.m., Jan. 20, 2021. The pandemic has been a dual-track story. The second track is Donald’s handling of the crisis – the corrupt, incompetent, amoral response of a piss-ant (an underrated ad hominem), pompous, maybe-billionaire who woke up one day to find himself an accidental president. (scroll down for full article)


The Boy Who Cried “No Wolf”

Regarding the novel coronavirus pandemic, President Trump is the boy who cried “No Wolf.”

He’s played down the crisis consistently for two months, to calm the markets for venal, self-serving purposes. He said there will be a “very good ending for us — that I can assure you.” He said the number of cases, “15 within a couple of days is going to be down to close to zero.” He said, “We’re finding very little problem, very little problem.” He reassured, “It’s starting to go in the other direction.” He fantasized, “One day it’s like a miracle, it will disappear.”

And he politicized, saying the coronavirus crisis is the “Democrats’ new hoax.” He said the World Health Organization’s numbers are wrong and turned down their offer of testing help in January. He callously preferred to keep 21 infected — and thousands of not-yet-infected — Americans holed up on a virus-growing petri dish of a cruise ship anchored off San Francisco rather than be transferred home: “I don’t need to have the numbers double because of one ship that wasn’t our fault.”

Now that reality has slapped him upside the head, and he’s realized he can’t tweet-intimidate a virus into submission with junior high school ad hominems, the boy has been forced to cry “Wolf!” To finally get serious. Because the boy is supposed to be the leader of the free world. And because the wolf now is snarling at his feet, tearing away the boy’s chances for reelection. And the boy knows reelection loss equals presidential immunity loss equals multiple indictments slapped on him at 12:01 p.m., Jan. 20, 2021.

The COVID-19 pandemic has been a dual-track story from the beginning. The first track is the fear and devastation of a plague, the likes of which have not been seen in a century.

The second track is Donald Trump’s handling of the disease in this country – the corrupt, incompetent, amoral response of a piss-ant (an underrated ad hominem), pompous, maybe-billionaire who woke up one day to find himself an accidental president.

“It’s going to disappear. One day it’s like a miracle, it will disappear.”

“The Democrats are politicizing the coronavirus. … This is their new hoax.”

Even Fox News and Breitbart have followed Trump in his 180-degree reversal on the seriousness of the pandemic. Of course, they’ve also followed the obsequious derriere-kissing of Dear Leader’s vice president, Cabinet members, and aides in praising his “leadership” in the face of this now-crisis. They have one real thing to point to: Donald’s repeated claims that he presciently stopped travel to and from China six weeks ago in the face of widespread opposition; therefore, he always took the virus “seriously.” But here’s the deal, folks (to channel Joe Biden): 1) There was virtually no resistance to the travel ban; and 2) U.S. airlines already had announced a halt to China service.

“Yeah, no, I don’t take responsibility at all [for the lack of testing kits], because we were given a set of circumstances and we were given rules, regulations, and specifications from a different time.”

[YAMICHE ALCINDOR]: “You don’t know about the reorganization that happened at the National Security Council?”

[DONALD TRUMP]: “It’s the administration, perhaps they do that, let people go. You used to be with a different newspaper than you are now, you know, things like that happen.”

Trump sycophants and lemmings lament the piling on of presidential criticism from opponents, at a time when we should all be coming together. You know — like the president has urged since Inauguration Day, for all Americans to “come together,” like The Beatles at their favorite ashram.

But it’s not really piling on if the criticism is warranted. One need only peruse any credible media source over the past two months to understand the massive failings of this administration in responding to the pandemic — let alone most other issues facing a presidency — while the president tries to blame his way out of responsibility.

“The Obama administration made a decision on testing that turned out to be very detrimental to what we’re doing, and we undid that decision a few days ago. … That was a decision we disagreed with. … But we’ve undone that decision.”

“[E]xperts and laboratory trade organizations say there was no ‘decision,’ and they don’t know what Trump is referring to. ‘We aren’t sure what rule is being referenced,’ [said] Michelle Forman, a spokeswoman for the Association of Public Health Laboratories. … ‘[W]e are not aware of anything that changed.’”

Moreover, the so-called piling on serves a legitimate purpose. Trump has not led. But he has been dragged to a position in which he must get serious about the crisis. For example, he finally declared a national emergency this past Friday, which most experts say is several weeks too late. He would not be there yet without the full force of legitimate, accurate, deserved criticism. It only seems like a piling on because he has performed so poorly.

Donald still has not picked up the ball fully on vital medical hardware and personal protection equipment production, test kit production, test reporting, federal-state guideline coordination, and message consistency. This is why the “piling on” needs to continue, to drag him toward some semblance of leadership, and to call him on the mendacious blame-shifting to hide his failings.

“If you go back to the swine flu, it was nothing like this, [the Obama administration] didn’t do testing like this, and they lost approximately 14,000 people. They started thinking about testing when it was far too late.”

“The Obama administration tested 1 million people for H1N1 in the first month after the first U.S. diagnosed case. The first U.S. coronavirus case was 50+ days ago. And we haven’t even tested 10,000 people yet.”

Some media sources, even so-called liberal ones, have held back on some of the criticism because of a sense of false equivalency, i.e., the assumption that both sides — Trump World and its critics — should get equal time and equal condemnation. But this is wrong. It’s simple: Trump should get more criticism, more condemnation because of his galactic ineptitude as a leader.

Sometimes failure and incompetence are not equal opportunity.