Disbelieve This President Like Your Life Depends on It. It Does 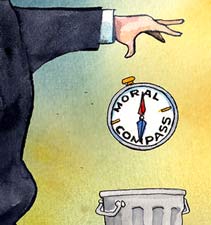 Yes, students in 2040 or 2050 American History class, there once was a United States president who spoke like this in public. And not just the occasional slip of tongue or flare of misplaced, disingenuous passion. President Donald Trump spoke in this shocking, emotionally immature manner near-daily — even to political allies who dared stray a comb-over hair’s width from Trump doctrine. And this is how he handled the 21st century COVID-19 plague, which killed so many of your grandparents. By the dawn of the 2020 pandemic, however, Trump’s fourth year in office, Americans had become desensitized to the junior high school ad hominem attacks and were no longer shocked by his galactic, pathological narcissism. (scroll down for full article)


[NBC’s PETER ALEXANDER]: “Is it possible that your impulse to put a positive spin on things [including the unproved-to-be-effective-on-COVID-19 malarial drug] may be giving Americans a false sense of hope and misrepresenting preparedness right now?”

[DONALD TRUMP]: “I say that you are a terrible reporter, that’s what I say. I think it’s a very nasty question, and I think that it’s a very bad signal that you are putting out to the American people. The American people are looking for answers and looking for hope, and you’re doing sensationalism. And the same with NBC [which owns] Concast. I don’t call it Comcast, I call it Concast. Let me just tell you something. That’s really bad reporting. … You ought to be ashamed of yourself.”

Yes, students in 2040 or 2050 American History class (if I’m so rewarded to have you reading my work), there once was a United States president who spoke like this in public. And not just the occasional slip of tongue or flare of misplaced, disingenuous passion. President Donald Trump spoke in this shocking, emotionally immature manner near-daily — even to political allies who dared stray a comb-over hair’s width from Trump doctrine. And this is how he handled the 21st century COVID-19 plague, which killed so many of your grandparents. By the dawn of the 2020 pandemic, however, Trump’s fourth year in office, Americans had become desensitized to the junior high school ad hominem attacks and were no longer shocked by his galactic, pathological narcissism.

“Mr. Trump’s performance on the national stage in recent weeks has put on display the traits that Democrats and some Republicans consider so jarring — the profound need for personal praise, the propensity to blame others, the lack of human empathy, the penchant for rewriting history, the disregard for expertise, the distortion of facts, the impatience with scrutiny or criticism. For years, skeptics expressed concern about how he would handle a genuine crisis threatening the nation, and now they know.”

(Baker, Peter & Haberman, Maggie; “Used to Meeting Challenges With Bluster and Force, Trump Confronts a Crisis Unlike Any Before”; The New York Times; 3/21/2020.)

Yes, this is an observational piece by Baker and Haberman. But virtually all critically thoughtful observers have seen enough to know it is accurate. Let me just say, “At least, I feel good about it. That’s all it is, just a feeling. I’m, you know, a smart guy.”

President Trump wanted to “reopen” the country for business after his administration’s 15-day social distancing guidelines ended, around April 1. When that idea met too much public flak, he touted an Easter Day (April 12) emergence from the suggested national isolation, for which he’s still pushing in press briefings and tweets. Meanwhile, his task force scientists, Dr. Anthony Fauci and Dr. Deborah Birx, are performing a finely tuned balancing act of contradicting and correcting Donald’s self-serving fantasies as much as they can without getting canned.

If Drs. Fauci and Birx go, there will be almost zero trustworthy information coming from the White House. Fauci’s appearance at briefings already has been intermittent, reportedly because the president is unhappy with the attention and respect he’s garnering from the press — and because Dr. Fauci blatantly has contradicted Trump’s statements in these briefings, moments after Trump made them. If it weren’t a true national medical crisis, and if Fauci hadn’t already ingratiated himself with the public, he would be long gone.

The U.S. infection curve still is arcing skyward, as multiple cable news graphs illustrate. The World Health Organization is warning that the virus is spreading faster, especially in the lower 48. Speaking of curves, those same graphs clearly show the U.S. now is where Italy, Spain, China, et al. were several weeks ago. Every credible health and science expert says the crisis is growing and there’s no way to predict its denouement. The only sane response is for governments, including ours, to do everything in their power to impede viral spread.

“We really, really need everyone to stay at home. … As the nation’s doctor I’m here to help America understand how we need to respond to this, and where I come down is that every single day counts. Every single second counts, and right now there are not enough people out there taking this seriously.”

“We’re not going to let the cure be worse than the problem. … Our country was not built to be shut down. … We’re going to be opening up our country, and we’re going to be watching certain areas. We’re going to be watching this very closely but can’t keep it closed for the next, you know, for years. … I’m not looking at months [either], I can tell you right now. … America will again and soon be open for business. Very soon. … Probably more death [will result from job losses] than anything we’re talking about with respect to the virus.”

No wonder “there are not enough people out there taking this seriously.” The president doesn’t want us to. Well, he does and he doesn’t.

Donald wants the country to get back to work, even if it risks lives. But he doesn’t want you to know that last part. So sometimes he appears to take the pandemic seriously. He had everyone fooled last week or so when he appeared to shed his carefree attitude (“It’s going to disappear. One day it’s like a miracle, it will disappear.”) and held a news conference to announce his newfound seriousness:

Even the dreaded “Trump-hating” New York Times and The Washington Post assailed us with multiple headlines of the president finally getting serious.

But they were fooled, too. It was a scam. Let me use the dreaded “Peanuts” metaphor: Schroeder promised to play “Beethoven’s Ninth Symphony” but instead … No, wait — Pigpen promised to take a bath, but once again … No, WAIT! — Lucy pulled the football on Charlie Brown’s kick attempt one more time.

Every expert says the U.S. government should take all possible measures to curb the virus spread. But this president is taking full-on half-measures.

He won’t implement the Defense Production Act to meet needed personal protection equipment and ventilator production because he’s afraid Democrats will turn his “som” ad hominem back on him (“I’m not blaming [Gov. Cuomo, but] he’s supposed to be buying his own ventilators.”).

He won’t kick-start necessary massive test kit production because it will increase the numbers (“We’re not a shipping clerk. It’s up to the governors.”).

Donald continues the happy-talk. He lied about test kit shortages (“I’m not hearing it.”). He lied about two Navy hospital ships being deployed, about millions of masks in transit, about private companies manufacturing ventilators, about drugs near approval for COVID-19 treatment. He blames the media (no, really) for “overblowing” the crisis, including a reporter who offered up a softball question to give the president a chance to show some humanity (“What would you say to Americans who are scared?” “I say that you are a terrible reporter.”).

A president’s word influences the country, especially his supporters. But this president has corrupted his influence. He equivocates, tacitly winking as he recites lukewarm social distancing warnings. He strengthens the conspiracy theories — already abounding that the pandemic is an exaggerated danger perpetuated by opponents to hurt Trump — which he himself started (“The Democrats are politicizing the coronavirus. … This is their new hoax.”).

Donald held another bifurcated press briefing yesterday. The bifurcation? Trump fantasy juxtaposed with careful-not-to-offend-the-president scientific analysis. Trump tried to draw in Dr. Fauci to back up his assertion that the WHO is biased toward China. Fauci expertly declined to weigh in on politics: “I’m a scientist.” Trump continued spewing the pabulum about “reopening” America by Easter, saying Tuesday, “You’ll have packed churches all over our country. I think it’ll be a beautiful time.” The scientists said there is no predicting when it will be safe to let down our guard. Trump said the U.S. has tested “far more” than any other country. His scientists mentally edited and qualified that statement: U.S. per capita testing is 10% of other afflicted developed countries.

Donald still refuses to nationalize testing and production of test kits, PPE, and ventilators, leaving crucial presidential power on the table and states to fend for and fight among themselves. He wasted two months of precious prep time while consistently playing down and denying the novel coronavirus threat while it spread in U.S. hot spots. But yesterday he was proud to crow, “It’s hard not to be happy with the job we’re doing.”

President Trump’s middle name is Mendacity. This is well known. Most of us have learned long ago to blow off his male bovine excreta. We know he is desperate to be reelected for corrupt reasons. But now there is a pandemic going on. Now you must disbelieve this president like your life depends on it. Because it does. ■