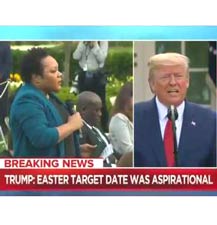 President Trump learned the term “aspirational” this week. His aides floated the word in the days before his Easter-retraction press briefing March 29, and he said it several more times Sunday for good measure. After pushing for the Easter (April 12) reopening, to “get our country back to work,” the president had to back down. Before his back-down presser, Trump had almost guaranteed it. His business buddies had gotten to him (read: lost profits). But then science went where it had never gone before: into the black hole of Donald’s consciousness. Doctors showed him numerical projections (read: political truths) that he could not tweet-attack away: If he did not get serious, many more would die, and he would be blamed (i.e., not reelected). But his TV ratings are WAY up. Don’t ever forget the smallness of this president. This small, incompetent, corrupt man is costing American lives. (scroll down for full article)


[ABC’s JONATHAN KARL]: “[A]re you able to guarantee, to assure these states, these hospitals that everybody who needs a ventilator will get a ventilator?”

[ABC’s JONATHAN KARL]: “So everyone that needs one will be able to get a ventilator?”

[DONALD TRUMP]: “Don’t be a cutie pie. Everyone who needs one — Nobody has done what we have been able to do, and everything that I took over was a mess. It was a broken country in so many ways. In so many ways other than this. We had a bad testing system. We had a bad stockpile system, we had nothing in the stockpile system. So I would not tell me what you’re telling me, like, being a wise guy.”

President Trump learned a new term this week — besides cutie pie. He learned the word aspirational. We know this is a new word for him because you can review thousands of hours of television footage and audio files going back decades and you’ll never hear him use it. But his aides and media gurus floated the word in the days before his Easter-retraction press briefing March 29, and prompted him to say aspirational several more times Sunday for good measure.

“More than 800,000 doctors across the United States sent a letter to President Donald Trump, urging him to reinforce social distancing after he suggested the economy could reopen by Easter. … [The doctors said, ‘This could] gravely jeopardize the health of all Americans.’ … [T]hey said medical staff are risking their lives to treat coronavirus patients and ask that the Trump administration support ‘science-based recommendations’ on social distancing.”

(Edmonds, Lauren & Griffith, Keith; “More Than 800,000 Doctors Plead With Trump NOT to Reopen the Country by Easter Because It Will ‘Gravely Jeopardize the Health of all Americans’”; DailyMail; 3/28/2020.)

After pushing for an Easter Sunday (April 12) reopening, to “get our country back to work,” the president finally had to back down. In the week or so before his March 29 back-down presser, Trump came as close as he could to telegraphing the Easter reopening without guaranteeing it. His business buddies had gotten to him, leading him to favor the economy (read: profits). But then science went where it had never gone before: into the black hole of Donald’s consciousness. The doctors of his coronavirus response team showed him numerical projections (read: political truths) that even he could not spin or tweet-attack away: If he did not get serious about the pandemic now, untold higher numbers would die, and he would be blamed (i.e., not reelected).

So to rewrite the history of his incessant Easter projection — and the folly and colossal irresponsibility of it — the White House came up with aspirational. As I said, his advisers started tossing it around in the days before the president debuted it, either to influence him through his favorite reference source — TV — or to provide him a soft landing after he had finally agreed to rescind the happy talk of churches filled on Easter.

“Top White House economic adviser Larry Kudlow says President Donald Trump’s hopes to reopen the country by Easter was an ‘aspirational target,’ and insisted the president would not rush efforts to stem the spread of the coronavirus.”

“Dr. Anthony Fauci, the nation’s top infectious disease expert, said President Donald Trump’s recent calls for the nation to ‘open up’ again by Easter were ‘aspirational,’ saying now was ‘no time to pull back’ as COVID-19 continues to spread around the country.”

“The president expressed really an aspirational goal as we continue to follow the data.”

Then finally, the man, himself:

Aspirational or incomprehensible, pushing this false hope encouraged Americans to drop their guard, especially MAGA supporters who already believe the pandemic is overblown to hurt Trump. Dropping their guard translates to increased cases and deaths — and not just in MAGA supporters. There is no legitimate defense for the president’s corrupt leadership and decision-making.

“The idea that Easter was simply aspirational is politically convenient — the president doesn’t want to be seen as backing down — but difficult to take seriously. After touting the holiday target date nearly a week ago, Trump had multiple opportunities to downplay its significance. He did largely the opposite. It’s unfortunate that at this point in the crisis, what passes for good news is when the president comes up with a ridiculous idea and then abandons it.”

Just for fun, an aspirational blast from the past:

“Sen. Susan Collins (R-Maine) on Wednesday acknowledged that her stated belief that President Trump had learned a lesson from impeachment was ‘aspirational,’ saying that she ‘may not be correct on that.’”

“There was good news and bad news emanating from the White House on Sunday. First, the bad news: a deadly pandemic is apparently gaining steam and killing more Americans. The good news? The ratings for President Donald Trump’s near-daily briefings are beating The Bachelor and Monday Night Football, at least according to a boastful series of tweets from the commander in chief.

“Because the ‘Ratings’ of my News Conferences etc. are so high, ‘Bachelor finale, Monday Night Football type numbers’ according to the @nytimes, the Lamestream Media is going CRAZY. ‘Trump is reaching too many people, we must stop him.’ said one lunatic. See you at 5:00 P.M.! — Donald J. Trump (@realDonaldTrump) March 29, 2020”

So his television ratings are way up.

President Trump continues to favor business and political expediency over human life. This is not hyperbole. He refuses to nationalize the pandemic response because it hurts industry, contradicts GOP states’ rights dogma, and presents the risk of the dreaded “som” ad hominem turned back on him. He refuses to issue a national stay-at-home order and fully implement the Defense Production Act — compelling U.S. companies to manufacture desperately needed PPE and ventilators — for the same reasons. He has dragged his presidential feet on empowering widespread massive testing — for which experts have begged — because he wants to keep his numbers down: fewer tests mean fewer cases counted.

But his TV ratings are up.