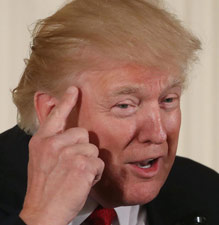 Also this week, America passed the 80,000-pandemic-deaths marker. Contrary to MAGA supporters I wrestle with on social media, this is the news — the man-bites-dog news. The 329,647,808 Americans who have not died from COVID-19 are the dog-bites-man news — though good news nonetheless. Trump cultists accuse the media of sensationalizing the bad news and fearmongering to the masses: “Why don’t you report all the people who have recovered!?! The good news!?!”

Oh. That reminds me of the other man-bites-dog bad news: A little more basic math produces a 6% U.S. mortality rate that has been holding. Additionally, a growing number of recovered victims, including many children, are suffering severe aftereffects that are confounding doctors.

President Trump says a yuge number of galactically dumb things, along with the colossal list of cruel, racist, and mendacious statements. But this week he might have established a superlative milestone on even his rhetorical record:

“She [Vice President Pence’s press secretary] tested very good for a long period of time, and then all of a sudden today she tested positive. … out of the blue. … This is why the whole concept of tests aren’t necessarily great. The tests are perfect but something can happen between a test where it’s good and something happens.”

“If we did very little testing, we wouldn’t have the most cases. So, in a way, by doing all of this testing, we make ourselves look bad. … [W]e’re going to have more cases because we do more testing.  Otherwise, you don’t know if you have a case.”

Cliché Alert: I’m going to use one here, but it’s such a good one and so apropos: Oops, he said the quiet part out loud.

Donald has such an interesting way of framing the truth. If you missed it: He doesn’t like coronavirus testing because it finds new cases.

Pundits, critics, experts, nonpartisans, doctors, epidemiologists, virologists, scientists, smart people, and avid news consumers like me have been saying this since February: Trump has been downplaying the pandemic and actively impeding a national testing strategy to keep the numbers down — because high pandemic numbers mean poor economic performance means reelection loss means indictment and possibly prison (at least, major embarrassment).

“If you think we have it completely under control, we don’t. The consequences [of premature reopening] could be really serious. My concern is that if states or cities or regions … disregard to a greater or lesser degree the checkpoints that we put in our guidelines … there is a real risk that you will trigger an outbreak that you may not be able to control. [That] paradoxically will set you back, not only leading to some suffering and death that could be avoided, but it could even set you back on the road to trying to get economic recovery, because it would almost turn the clock back.”

Note that Dr. Fauci put his warnings — about opening the U.S. economy prematurely — in terms Trump can understand. First he warned of “suffering and death that could be avoided,” specifically directed to those with humanity. Then the doctor framed it for the humanity-challenged, e.g., the president: “[I]t could even set you back on the road to trying to get economic recovery.”

Self-dealing and corrupt is one thing. Stupid is another. Dr. Fauci is telling Trump, in secret code, that if he reopens too early, he’ll likely sabotage his own venal goal of economic-recovery-at-any-cost to win reelection.

It appears stupid still is winning out.

“We ought to have a little bit of humility in our belief that we know what’s best for the economy. And as much as I respect you, Dr. Fauci, I don’t think you’re the end-all. I don’t think you’re the one person that gets to make a decision. We can listen to your advice, but there are people on the other side saying there’s not going to be a surge and then we can safely open the economy. And the facts will bear this out.”

Sen. Paul, Sir, no one has ever — ever — argued that Dr. Fauci is the “end-all” decision-maker, or any kind of decision-maker. This is borne out by the needless catastrophic sickness and death that already has occurred, precisely because Donald has ignored so much of the doctor’s and his team’s guidance.

“[I] never made myself out to be the end-all and only voice in this. … [T]here are a number of [other officials.] … I’m a scientist, a physician, and a public health official. I give advice, according to the best scientific evidence. I don’t give advice about economic things. … [Since] we don’t know everything about this virus … we’ve really got to be very careful, particularly when it comes to children. … I think we better be careful [about opening schools in the fall as Sen. Paul advocates,] … not [be] cavalier, in thinking that children are completely immune to the deleterious effects. … I am very careful, and hopefully humble in knowing that I don’t know everything about this disease. And that’s why I’m very reserved in making broad predictions.”

“Dr. Fauci is one of the finest public servants we have ever had. He is not a partisan. His only interest is saving lives. We need his expertise and his judgment to defeat this virus. All Americans should be thanking him. Every day.”

If I wore one, my hat would be off to Liz Cheney. She is sure to get major blowback from the president for this.

“She tested positive, out of the blue. This is why the whole concept of tests aren’t necessarily great.” (— DJT)

“In the history of dumb things said by Donald Trump — and remember, there will one day be a library filled with them — that might be the dumbest thing he ever said, putting it in the running for the dumbest thing ever spoken by man. She was tested and didn’t have it. Then she got it. Then the next test showed that she had it. Does Trump think the tests are good only if they tell you news you want to hear? My girlfriend took a pregnancy test, it said she wasn’t pregnant. Then we had a bunch of sex. Then, for some reason, all of a sudden, the test said she’s having a baby. That’s why these tests aren’t so great. The tests should start wearing a condom.”

Your White House at Work

In the week or so since President Trump mandated closed meat producers to reopen, and open ones to stay open, a dozen or more major-meat-plant-virus-hot-spots have exploded with infections. These new outbreaks have pushed the U.S. confirmed cases number 19% higher over this time. The counties in which they’re located have seen up to 40% increases in COVID-19 contractions.

In an attempt to bring the numbers down, Gov. Pete Ricketts (R-Neb.) ordered his state health officials to cease sharing figures about how many workers have been infected at each plant. The Nebraska data blackout covers four of the Top 10 U.S. counties (with meat plant hot spots) measuring the highest per capita infection rates.

Meanwhile, Donald tweet-supports the “liberation” of Democratic states and tweet-loves his GOP governors.

[FUN FACT NO. 1]: After Dr. Fauci relayed his dire warnings to the Senate this week, President Trump became enraged. The next day, he said the doctor was “playing both sides” and that he “didn’t accept” the warnings.

[FUN FACT NO. 2]: The White House has been pressuring the CDC to change their COVID-19 death-counting parameters to modify the numbers downward. This comes while Dr. Fauci is warning the current numbers already represent a significant undercount.

[FUN FACT #NO. 3]: The Associated Press reports the CDC’s detailed guidelines for reopening the economy have been prepared and “signed off on by the director” for the last month. The White House, however, has blocked the release, quietly informing CDC officials their guidelines “would never see the light of day.”■