2020 Grads: No Presidential Role Model (or Soup) for You 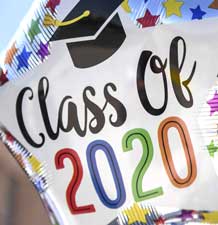 I watched the virtual graduation ceremony for 2020 high school seniors. Their literal ceremony was preempted by a once-in-a-century pandemic. Didn’t recognize half the performing artists. To be expected. Did recognize the keynote speaker, Barack Obama. So nice to hear his reassuring tone. As those of us born before 2002 approach our graduation anniversary, I can’t help but review the time gone by. Contrary to the universal admonition not to beat oneself up over past mistakes, I still find myself nursing self-inflicted bruises over taking the wrong forks in the roads (— thanks to Yogi Berra). So many things I would’ve done differently, except for marrying my tremendous partner of 38 years who has kept me and the family as steady as possible. But I’m where I am now. Don’t you wish you could grab those 2020 seniors and point them in the right direction? No, I know. Most will find their way. And as several parents averred, they’ve learned more from their graduating offspring than vice versa. So that’s my goal going forward: to resist set-in-your-ways age inertia, keep learning from others, especially young adults, and strengthen my empathy muscle. I might not have recognized the artists H.E.R. and Bad Bunny, but I’m up on Malala. Many 2020 seniors will be role models in the future. But they need role models now. Sadly, the current president is not one. (scroll down for full article)

Last Saturday night I watched the national virtual graduation ceremony for 2020 high school seniors. Their literal ceremony, prom, and standard end-of-year senior shenanigans were preempted by a once-in-a-century deadly pandemic. Didn’t recognize half the performing artists. To be expected. Did recognize the keynote speaker, Barack Obama. So nice to see his comforting face and hear his reassuring tone.

As those of us born before 2002 approach the anniversary of our own high school graduation, I can’t help but review the time gone by. Contrary to the universal admonition not to beat oneself up over past mistakes and poor decisions, I still find myself nursing self-inflicted bruises and aching bones over taking the wrong forks in the roads (— thanks to Yogi Berra). So many things I would’ve done differently, except for meeting and marrying my tremendous partner of 38 years who has kept me and the family as steady as possible.

But I’m where I am now. Don’t you wish you could grab those 2020 seniors by the throat and point them in the right direction? No, I know. Most will find their own right direction. And as several parents on the show averred, they’ve learned more from their graduating offspring than vice versa.

So that’s my goal going forward: to resist set-in-your-ways age inertia, keep learning from others, especially young adults, and strengthen my empathy muscle. I might not have recognized the artists H.E.R. and Bad Bunny, but I’m up on Malala.

Many of the graduating 2020 seniors will be role models in the years to come. In the meantime, they need role models now. Sadly, the current president is not one.

“I’m not paid to be a role model. I’m paid to wreak havoc on the basketball court.”

Barkley had been embroiled in several un-role-model-like incidents including attempting to spit on a racial-slur-slinging heckler sitting courtside during a game. Charles’ celebrity spittle found its way onto an innocent young girl’s blouse. The incident made news at the time. To his credit, Mr. Barkley later tracked down the girl and her family, apologized, and befriended them with complementary Suns tickets.

Shortly after Charles Barkley’s not-a-role-model declaration, a fellow NBA star, “The Mailman” (he delivered on the court), Utah Jazz power forward Karl Malone, responded in a June 14, 1993, Sports Illustrated column titled “One Role Model to Another”:

“Charles … I don’t think it’s your decision to make. We don’t choose to be role models, we are chosen. Our only choice is whether to be a good role model or a bad one.”

Ultimately, Barkley role-modeled behavior we all wish our kids would aspire to: He made a mistake, owned it, apologized for it, and made amends. In the years since, Charles Barkley has been a mixed role-modeling bag, a sometimes brawler but known as a man of humor and honesty.

It has been noted famously, even by supporters, that President Trump is a not a role model mothers and fathers want their kids to look up to. In fact, many parents of juveniles rush to change the television channel if the president is speaking and their children are in the room.

My contention is that you can’t think a president’s policies are good if you also don’t think he or she is a good role model for kids. The two are inextricably intertwined, joined at the hip, and several other redundant phrases meaning tightly connected. I’m with Karl Malone. To paraphrase: “Presidents don’t choose to be role models, they are chosen. Their only choice is whether to be a good role model or a bad one.”

Graduating seniors of 2020, here’s a list of presidential Trumpian behaviors not to emulate.

— Don’t make up lies about where your adversaries were born.
— Don’t disparage the judge overseeing your company’s fraud trial because of where his parents were born.
— Don’t disparage a prisoner-of-war hero’s service to our country simply because that hero criticized your policies.
— Don’t make numerous, disparaging remarks about the opposite gender, even if the remarks aren’t being recorded.
— Don’t call a woman a “fat pig” or accuse her of having “blood coming out of her wherever” if she asks you a tough question.
— Don’t kiss, grope, or make other sexually physical overtures toward members of the human race without their permission.
— Don’t disparage the grief of Gold Star parents — those who have lost a daughter or son fighting for the U.S. military — simply because those parents disagree with your policies.
— Don’t call for the death penalty for five exonerated, innocent young men simply because they are non-Caucasian.
— Don’t lie more than 18,000 times in three and a half years.
— Don’t assign every adversary or critic a public, ad hominemistic, junior-high-school-put-down nickname, then shower them with additional disparaging remarks — accurate or not — about their appearance and career success.
— Don’t call countries that have populations comprising ethnicities you don’t like “sh**hole countries.”
— Don’t consistently revert to disparaging any news source information you don’t like as “FAKE NEWS!”
— Don’t consistently pressure your friends to lie and cheat for you, and don’t chastise them when they refuse.
— Don’t say, “Why was there a Civil War? Why could that one not have been worked out?”
— Don’t say, “Many of them are fine people” when referring to neo-Nazis marching with torches and chanting “Jews will not replace us!” at a Confederate statue-supporting counterprotest.

If You Ever Become President

— Don’t lie about the popular vote that you lost. Demonstrate good sportsmanship by being a gracious loser.
— Don’t blatantly pitch your private businesses to foreign diplomats and domestic political allies for illegal profit.
— Don’t let your adult children presidential advisers pitch their private businesses for illegal profit. Better yet, don’t nepotistically appoint your adult children to high-level White House positions for which they are hopelessly unqualified.
— Don’t collude with a foreign adversary, while minutely calibrating that collusion so that it’s just shy of criminal.
— Don’t separate frightened foreign-born children from their parents by locking them in cages indefinitely — without proper diet, hygiene, and health care — because their parents are desperate or might have used poor emigration judgement.
— Don’t double your Palm Beach private club initiation fees, from $200,000 to $400,000, five days after taking office.
— Don’t order a travel ban, seven days after taking office, without telling any of your Cabinet or other government agencies. It might cause worldwide havoc.
— Don’t eliminate numerous health and safety regulations and programs that save the lives of children and other living things.
— Don’t disparage national retail brands because they decided to discontinue your daughter’s line of fashions.
— Don’t consistently disparage U.S. allies and obsequiously cozy up to world dictators.
— Don’t eliminate ethics courses, terminate ethics department heads, and fire inspectors general who uncover wrongdoing by your political allies or bad news about you.
— Don’t accuse your predecessor, with zero evidence, of non-existent illegal acts and various phony scandals.
— Don’t ignore a pandemic that is projected to kill 100,000 to 240,000 Americans. On a related note, don’t stop addressing said pandemic — ensuring massive additional loss of life — because you need the economy to improve to be reelected, to avoid multiple indictments.
— Don’t lie to the country that you’re taking a dangerous drug as a prophylactic against the aforementioned pandemic, just to “prove” yourself right about promoting that unproved drug — though it’s been contra-recommended by your own FDA, CDC, and pandemic task force doctors.
— Don’t obstruct justice — over 10 times that we know of.
— Don’t systematically end all your predecessor’s (or predecessor’s wife’s) indisputably good programs simply because you’re obsessed by hateful jealousy because you can never — and I mean never — be the man he is.
— Don’t urge your supporters to inflict physical violence on journalists or other living things that report information you don’t like.
— Don’t say, “I just fired the head of the FBI. He was crazy, a real nut job. … I faced great pressure because of Russia. That’s taken off.”
— Don’t say in response to a pandemic, “Testing is overrated … if we don’t do as much testing, we have less cases … it’s common sense.” Additionally, don’t say, “I take no responsibility,” and “I wouldn’t have done anything differently.”

There are so many more. Play the home game, fun for the entire family. See how many Trumpian “don’t”s you and your friends can add to each list.

In pandemic news this week, a statistic (and life) slapped me upside the head. The United States makes up 4.3% of the world’s population, but it accounts for 28.4% of the world’s COVID-19 death toll. What else do you need to know to question President Trump’s pandemic response? ■