Why Wide Acceptance of BLM Now? Trump, of Course 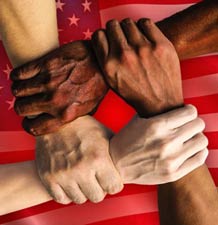 ~SUMMARY~
One question has loomed since George Floyd’s death: Why are THESE protests setting records for participation and broad ethnic makeup? It’s because Donald Trump has been president for three and a half years, and even the nicest Caucasian families have had it. This shift among the passive center has supercharged the dissent. Get this: The protests are justified, says 84% of Americans. You can’t find 84% of Americans who all like ice cream. That’s what is different. The BLM cause has merged with the until-now-quiet disapproval of Trump’s racism and corruption. Even the politest of WASP’s in largely segregated suburbs no longer can stomach police murder of black men. Even the most genteel white people no longer recoil at the slogan “Black Lives Matter” and can explain the folly of responding with “All Lives Matter.” Even the nicest of Caucasian families now are willing to disapprove publicly of the worst American president in history. (scroll down for full article)

“White-male-centric xenophobia is the beating heart of Trumpism.”

This is a quote from my good friend and ideological brother, American philosopher Bob O. I’ve been sitting on it for a few months, waiting for an applicable opportunity to tie it into current events. As the coronavirus pandemic began consuming news cycles in late January, the focus turned toward President Trump’s other faults: primarily the corruption, incompetence, and amorality inherent in allowing some 50,000 unnecessary U.S. deaths through 1) attempting to play down the pandemic, 2) blatantly not responding to it, and 3) wishing it away — or at least trying to make the country believe it has been wished away.

Why? Because the pesky deadly virus crippled the stock market, ballooned the unemployment rate, and threatened the president’s one long-shot chance at reelection: his claim to have shepherded a booming U.S. economy — the greatest economy in Earth’s 6,000-year history (shout out to his evangelicals). Never mind that Trump’s (former) great economy was built squarely on the positively trending economic shoulders of his predecessor, President Barack Obama, and all Donald had to do was not screw it up.

Then came Memorial Day. Then came George Floyd, a 46-year old African American Minnesota resident accused of using a counterfeit $20 bill to buy a pack of cigarettes. Mr. Floyd, unarmed and unthreatening, was handcuffed by police and taken to the pavement on a Minneapolis street. Though the suspect did not resist, Officer Derek Chauvin held a knee to his neck for eight minutes and 46 seconds. Three other city cops stood by to help hold Floyd down and keep concerned bystanders at bay.

During the first six minutes — while he was still conscious — George Floyd pleaded at least 16 times, “I can’t breathe!” Several times he injected a respectful, “Sir,” as in, “Sir, I can’t breathe!” Before he lost consciousness, he begged, “Don’t kill me!” and twice called out for his deceased mother.

During the last three minutes, Mr. Floyd was “nonresponsive.” In fact, one of the standing-by officers felt for a pulse when the “nonresponsiveness” manifested and announced he felt none. No officer offered medical assistance. Derek Chauvin’s knee remained on George’s neck during those final minutes of “nonresponsiveness.” An ambulance arrived. The officer maintained his position for almost another minute. A medic instructed Chauvin to free the suspect’s throat, which occurred at the 8 minute, 46 second mark. George Floyd was declared dead on arrival at the hospital.

The protests began the next day. Record-setting. Across 100 American cities. Comprising all ethnicities. Including even the nicest of Caucasian families.

In the days after George Floyd’s murder, Trump was beside himself, consumed with ineptitude and fear. Massive but peaceful protests were overwhelming the streets and park outside the People’s House. That Friday he had been humiliated with the label “Bunker Boy” for being whisked by the Secret Service to a safe compartment — a bunker — below ground for an hour while his arch enemy and presidential opponent Joe Biden (D-Del.) met with protestors in solidarity. He had to show toughness. So he ordered the 100%-nonviolent protesters cleared by federal officers on horseback firing rubber bullets, releasing tear gas, and setting off flash-bang shells amid the crowd.

He did it. He cleared the bastards. Then Trump strolled down H Street, past now-protestor-free Lafayette Square, to the steps of iconic St. John’s Episcopal Church. He offered no comments or prayers. He held an upside-down Bible over his head — ultimately flanked by several top lieutenants — to consummate a photo op.

Since the president’s egregious use of military force on peacefully protesting citizens of his own country, and his threats to escalate those attacks, Mr. Trump has been excoriated by a dozen current or retired three- and four-star generals, including James Mattis, Michael Mullen, John Kelly, Douglas Lute, Martin Dempsey, Colin Powell, David Petraeus, and William McRaven. This list includes four former Joint Chiefs of Staff chairmen and various Cabinet secretaries.

But one question has loomed since George Floyd’s death: Why are these protests setting national records for number of sites, participation size, duration, and broad ethnic makeup?

Since the incident Memorial Day, May 25, protests have continued to spread across 100-plus large cities and many smaller — some formerly identified by racial intolerance — communities. They’ve continued growing, with record turnouts, for the 17th consecutive day. And they are attended by the widest cross-section of racially diverse participants ever seen in civil rights demonstrations. Cap these milestones with several poll results showing widespread support for the protests. The respected CNN/SSRS data reporting poll this week cites a whopping 84% of Americans believe the George Floyd, Black Lives Matter protests are justified.

What has changed? First, the multiple-video evidence of George Floyd’s murder-by-cop is air-tight, indisputable and has been internet-propagated at the peak of the smartphone age.

Second, Donald Trump has been president for three and a half years, and even the nicest Caucasian families have had it up to here (index finger at nostril level) with his blatant racism, not to mention, as I said, his other faults.

The apathetic, casual-news-consuming middle has been moved. To quote another of my favorite American philosophers, SNL’s Pete Davidson, and his rhetorical question about being affected by current events: “Colin, you know how wrong about politics you have to be for, like, me to notice!?”

Well, the passive center finally has been moved to notice Trump’s galactic “wrongness about politics,” his despicability concerning racial bigotry and more. Even the damn lily-white-owner-representing NFL commissioner, Roger Goodell, has apologized publicly for the NFL’s opposition to San Francisco Forty-Niners quarterback Colin Kaepernick’s knee-taking-during-the-National-Anthem protests before games four seasons ago. [FUN FACT]: Kaepernick’s Forty-Niners contract was up after that season, and he has been blackballed from the league since then.

That’s what is different from the civil rights protests of the 1960s and other movements leading up to Trump’s presidency. The intensity of the George Floyd, Black Lives Matter cause has merged with the until-now-quiet disapproval of Donald Trump racism, turpitude, and chronic mendacity.

“White-male-centric xenophobia is the beating heart of Trumpism.” And here, the xenophobia includes the Trump white-male-centric base’s contention that African American (and other ethnic) citizens shouldn’t be here in the first place, and they should all “go back where they came from.”

Even the politest of WASP’s in largely segregated suburbs no longer can stomach video evidence of a pattern of violent and murderous police behavior toward black men. Even the most genteel white people no longer recoil at the slogan “Black Lives Matter” and can explain the folly of responding with “All Lives Matter” or even worse, “White Lives Matter.”

Even the nicest of Caucasian families now are willing to disapprove publicly of the worst criminal, self-dealing, anti-constitutional behavior of an American president in Earth’s history — or at least the last 6,000 years. ■