If You’re Under 88, It IS “The Most Important Election of …” Yada, Yada 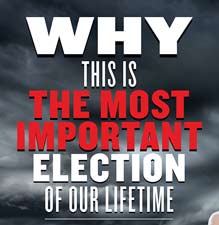 “Most Important Election of …” Yada, Yada

Many people have been decrying the overuse of the declarative noun-phrase “most important election of our lifetime.” They think it’s like word inflation: it doesn’t mean (or buy) what it used to. The Atlantic called for its permanent retirement in 2012. Can I just say they’re all dead wrong this year. If you’re under 88 years old — born after America was desperate for FDR to pull her out of The Great Depression, then later, depending on him to steer our nation through the heating up and boiling over of World War II — then this IS the most important election of your lifetime.

We can retire the phrase after the existence of the-United-States-as-we-know-it is no longer threatened.

Some independents, apathetics, and even “progressive babies” (Disclaimer: I’m a progressive, albeit one who doesn’t want our country to burn down) still like to profess there’s no difference between the candidates, Joe Biden and Donald Trump. They grouse that “nothing ever changes” or “all politicians are on the take.” They plan not to bother voting. Or they will “protest-vote” (because they detest “lesser-evil” voters) for some alternative candidate, a third-party vote that might produce a coveted progressive party and president someday. Down the road. In a few decades. Maybe.

Apples to NO Apples

These guys say that Biden-compared-to-Trump is just another apples-to-apples comparison, the juxtaposition of two pieces of the same distasteful fruit (these guys don’t like apples) from the same politician bushel basket.

But this isn’t apples-to-apples. It’s not even apples-to-oranges. It’s apples to NO apples (— thanks to Dr. Lipi Roy). It’s having a recognizable America after 2020 or not. If Trump is reelected, the country likely will be damaged beyond repair.

Virtually all these Republicans are pro-life Christians who want more conservative judges. They all dislike som. Almost all of them hold traditional conservative policy values — which I disagree with but still can respect. But they also all know that none of these things matter if we allow an aspiring autocrat to tear down the institutions and moral foundation of our country’s government, until there’s nothing left to fight for. 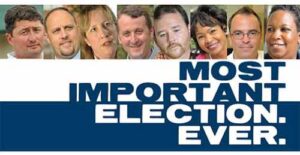 In my occasional “Just This Week” feature, I highlight political nuggets from the previous seven days’ headlines. The following are four terrifying Trumpian developments, any single one of which would have exploded GOP legislators’ heads in the pre-Trump era. Today’s Republican senators, representatives, and other Trump apologists, however, simply turn their heads and pretend they “just doesn’t see” (— thanks to Bob Dylan). Meanwhile, the rest of us (thinking, caring people) continue drowning in a never-ending tsunami of legitimate outrage.

— Rudy Giuliani, a top Trump lawyer, has been a witting or unwitting Russian asset, feeding (pro-Putin) anti-Biden propaganda to the president, as acknowledged by the intelligence community. Trump was warned of this but ignored the warnings because he loved the information.

— Dr. Scott Atlas (NOT an infectious disease expert), a new Trump Coronavirus Task Force member who has consolidated control, told the country that masks don’t work, thrilling the president but horrifying every legitimate medical and scientific health expert in America, who already are fearing major surges even with precautions in place.

— Trump is calling on Attorney General William Barr to investigate (and potentially indict) — before the election — his presidential opponent Joe Biden based on propaganda fed to him by witting or unwitting Russian asset Rudy Giuliani, Trump’s lawyer.

— 545 separated migrant children (of the 5,400 separated for months in 2018) are in danger of never seeing their parents again because the Trump border patrol lost track of those (probably deported with no record) parents. 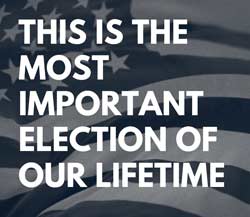 “Mr. Trump and Mr. Giuliani have promoted unsubstantiated claims about Mr. Biden that have aligned with Russian disinformation efforts. … [A] meeting [occurred] on Dec. 5 between Mr. Giuliani and Andriy Derkach, a Ukrainian member of Parliament who takes pro-Kremlin positions. The Treasury Department recently labeled him ‘an active Russian agent for over a decade.’”

“Twitter removed a tweet from top White House coronavirus adviser Dr. Scott Atlas for questioning the effectiveness of masks in combatting COVID-19. Atlas’ tweet read ‘Masks work? NO’ and preceded several others that questioned the use of face coverings in preventing the spread of the coronavirus. In a statement to The Hill, Twitter said the doctor’s tweet ‘was in violation of our COVID-19 Misleading Information Policy’ that ‘prohibits sharing false or misleading content related to COVID-19 which could lead to harm.’”

Trump Calls on AG Barr to “Lock Him (Joe Biden) Up”

“President Donald Trump on Tuesday called on Attorney General William Barr to immediately launch an investigation into unverified claims about Democrat Joe Biden and his son Hunter, effectively demanding that the Justice Department muddy his political opponent and abandon its historic resistance to getting involved in elections. … Trump for the first time explicitly called on Barr to investigate the Bidens and even pointed to the nearing Nov. 3 election as reason that Barr should not delay taking action. ‘We’ve got to get the attorney general to act,’ Trump said in an interview on ‘Fox & Friends.’ ‘He’s got to act, and he’s got to act fast.’ … Julian Zelizer, a presidential historian at Princeton University, suggested that Trump’s pressure campaign on Barr has moved into uncharted territory for presidential politics.”

“Lawyers appointed by a federal judge to identify migrant families who were separated by the Trump administration say that they have yet to track down the parents of 545 children. … The Trump administration instituted a ‘zero tolerance’ policy in 2018 that separated migrant children and parents at the southern U.S. border[, then] later confirmed that it had actually begun separating families in 2017. … [M]any of the more than 1,000 parents separated from their children under the [2017] pilot program had already been deported before a federal judge in California ordered that they be found.

“‘It is critical to find out as much as possible about who was responsible for this horrific practice while not losing sight of the fact that hundreds of families have still not been found and remain separated,’ said Lee Gelernt, deputy director of the ACLU Immigrants’ Rights Project.”

Joe Biden compared to Donald Trump? This isn’t apples-to-apples. It’s apples to NO apples. It’s having a recognizable America or not. ■