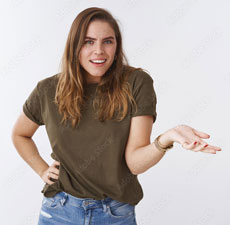 So a while back I’m on Facebook (the Instagram of the middle-aged), and I see a comment from an acquaintance of a few decades past. We never were best buds but we were friendly. A third party had posted a graphic with text that listed many of the respectable news sources (The Washington Post, The New York Times, ABC, NBC, CBS, etc.) and labeled them all fake news. Out of nowhere, my old acquaintance popped up in the feed and commented: “You can add Fox News to that list.”

Oh, a fellow traveler, I thought.

I private-messaged her and said, “Hi Jane. I just saw your response to our mutual Facebook friend about fake news. You said, ‘You can add Fox News to that list!’ Are you a Dem like me?”

Jane replied, “Hi Tom, I am a ‘Clowns to the left of me, jokers to the right,’ neither ‘side’ is telling the whole truth. Liars, cheats, and thieves, one and all. Stuck in the middle …”

I replied, “OK. Well, I’m definitely one of the ‘clowns to the (solid) left,’ but I can appreciate your position.”

Then I did something I never do: “Can I friend you?”

I’ve resolved in recent years never to solicit a Facebook friendship from someone I actually know in real life because of my tendency to rock the boat with my posted communications. If people solicit me, great. But I don’t ask them.

For the first time in several years, however, that Thursday I took a chance with an old acquaintance.

Not that I was waiting around for her to accept my friend request or anything like that.

On Monday I wrote, “Hi Jane. Scratch my friend request. I’ve figured out why you might think that’s a bad idea. Take care …”

Within an hour (52 minutes, to be exact), Jane responded, “The reason? I am not interested in joining the political fray with anyone. I am a lone moderate in a country of zealots. You take care, too.”

First, I was so mad at myself. I could’ve kicked myself for breaking my personal rule of never soliciting a Facebook friendship from a known acquaintance. Never again.

Second, she could have responded sooner (and not left me hanging) with a pleasant, self-deferential message explaining her desire to stay out of politics. Anyone would have understood that position.

Third, the nerve of this old acquaintance lumping me in with “zealots,” “clowns,” and “jokers,” “liars, cheats and thieves, one and all.” I truly was bugged and offended. I needed all my self-help tricks to get it off my mind so I could fall asleep for the next few nights.

Good thing I don’t take things personally. I got over it in four or five weeks. (— thanks to David Letterman)

I question the motives of the adamantly moderate.

It’s one thing to admit you don’t follow the news much, by choice, and you don’t lean one way or another because you’re admittedly uninformed. Or you’re a media or business professional who must maintain neutrality out of professional ethics.

But the adamantly moderate are a different breed. They purport (or at least imply) that they’ve studied the issues carefully, thought them through, and arrived at a carefully considered conclusion: Both sides are “liars, cheats, and thieves, one and all,” and the only person with integrity is them, the “lone moderate in a country of zealots.”

I don’t think so. Let me tear this position apart.

To be adamantly moderate is to be intellectually lazy. At least the admittedly uninformed admit their laziness. The adamantly moderate want you to believe they are informed and that they’re the only reasonable people in the discussion. They adopt this position so they don’t have to think, don’t have to take an ethical position on any issue. There is no danger of offending anyone.

“An illustration of false equivalency was when many conservatives tried to equate these two things: 1) Senate Majority Leader Harry Reid (D-Nev.) using the term Negro (without any irony) to designate African Americans in a private conversation; and 2) former Senate Majority Leader Trent Lott (R-Miss.) opining, at former Sen. Strom Thurmond’s (R-S.C.) open-to-reporters 100th birthday party, that America would be better off if Thurmond (and his platform of institutional segregation) had won the 1948 presidential election.

“OK, Reader. You just heard the comparison of one faux pas to another. Do you say to yourself, ‘Yeah, Reid was just as guilty as Lott was and Reid also should resign’? Or do you take an extra few seconds to actively listen to what you just heard? You might then say to yourself, ‘Wait a minute. Harry Reid — who played a key role in drafting the first Black U.S. president to run for the office — used an outdated though proper-for-its-time ethnic term, an innocent mistake for an old white guy. Reid exhibited no real bigotry. But Lott joked, the way a joke indicates one’s true beliefs, that a President Strom Thurmond (ergo legal segregation) would have been better for our country. Now that’s real racism and Lott appropriately was forced to resign.’

“If you said these two examples are not equivalent, you just reasoned in a critically thoughtful manner.”

This is why the adamantly moderate are almost as dangerous as MAGA seditionists. The adamantly moderate didn’t tase a Capitol policeman almost to death and erect a mock gallows outside the halls of Congress while her comrades stormed House Speaker Nancy Pelosi’s office and terrorized lawmakers and their staffs to reverse a legitimate election. But the adamantly moderate tacitly approve this lawlessness by their neutrality — or their silence.

The Trump era has hardened opposing political positions. There is no doubt about that. The MAGA movement has activated millions of hitherto dormant white nationalists, many of whom didn’t know they were white nationalists until Donald made it “acceptable.” And the counterreaction to that is the resolute determination of hitherto dormant patriots, those who draw the “moderate” line at massive presidential corruption and the traitorous, violent attempted dismantling of American democracy.

There might have been such a thing as a true political moderate back when both sides (read: Republicans and Democrats) had common sense and a respect for the representative democratic process. In those days, there might have been legitimate disagreement or “middle ground” about the pros and cons of supply-side economics or allied relationships. That was then.

Today, here are a few of the issues on which a sincere American must decide where they fall.

[DEMOCRATS:] There is never a good reason for violently interfering with Congress in an attempt to subvert a presidential election.

[REPUBLICANS:] If our guy loses, it’s OK to look for ways to keep him in power, even if it means cheating — though we would never admit to cheating.

[ADAMANT MODERATES:] Both sides have a point. I’m OK with an attempted coup if the aggrieved side really believes it’s right. They’ll all work it out in the end. But could we try not to kill any Capitol police in the process?

[DEMOCRATS:] Migrant parents might have broken laws in crossing the border, but their children had no choice, and the parents simply were desperate for a better life. Separating families indefinitely as a deterrent was grotesque and inhumane.

[REPUBLICANS:] We needed to separate the 5,400 migrant children from their parents indefinitely at the border — even though the non-profit, nonpartisan Physicians for Human Rights determined this to be torture — to deter future illegal immigrants. Those children won’t be busting across the border again anytime soon.

[ADAMANT MODERATES:] We should have stopped the psychological torture at, maybe, 2,700 or so migrant children, which would have been much more acceptable.

[DEMOCRATS:] This was a once-in-a-lifetime national crisis that needed competent government intervention. Trump’s corrupt downplaying of the crisis to try to ensure his reelection resulted in approximately 200,000 needless deaths, about half of the pandemic deaths on his watch.

[REPUBLICANS:] Trump was right: The pandemic was mostly a hoax to harm him. I won’t give up my freedom to live unmasked, even for a short time to save lives. Your right not to die does not trump my right to risk my own health and everyone’s health around me.

[ADAMANT MODERATES:] If we could have taken just enough precautions to kill only 100,000 Americans needlessly instead of 200,000, maybe that would have been a good compromise, a good balance of safety measures versus “liberty.”

[DEMOCRATS:] No election campaign ever should accept foreign help. This is cheating, whether it is technically illegal or not. And Trump’s multiple attempts to block the investigation definitely were illegal — those crimes should be prosecuted.

[REPUBLICANS:] It’s OK to take election help from any country that offers it, even if you have to walk the line of criminality — especially if it’s my candidate. You’re a sucker if you don’t. And of course, Trump had to block the investigation: The “deep state” was out to get him.

[ADAMANT MODERATES:] I’m OK with four or five different instances of obstruction of justice. But 10 — as outlined in the Mueller report — now that’s beyond the pale.

[DEMOCRATS:] Congress authorized military money for Ukraine to fight Russian invasion. Trump tried to hold that money back (costing that country lives in the process) until Ukraine produced phony dirt on Donald’s likely presidential opponent. Trump got caught and had to release the money without getting his dirt. He was impeached and should be barred from holding office.

[REPUBLICANS:] It’s totally fine to “negotiate” with allies. It’s done all the time. Besides, Mr. Trump was just trying to clean up Ukrainian corruption — though he’s never cared about it before and, in fact, cut programs to do just that.

[ADAMANT MODERATES:] Oh, both sides are corrupt and break the law all the time. Trump just got caught.

In this historical period, having experienced the depravity and epistemic crisis of a Trump presidency, a post-Trump era, and the horrifying possibility of a future Trump presidency, there is no middle ground if you care about “Truth, Justice, and the American Way.” (I know — DC Comics updated Superman’s motto last year to “Truth, Justice, and a Better Tomorrow.” But I’m a purist, and the old saying fits here much better.)

Adamantly moderate, indeed. Populations have suffered and died from adamant moderation. Civilizations have fallen because of it.■