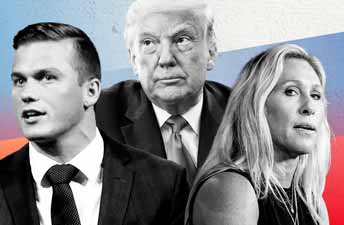 To be fair, the majority of Republican luminaries are anti-Putin and pro-Ukraine. But there is a vocal minority who support, enable, or apologize for the Russian strongman: the GOP’s Putin Wing (so-dubbed by Rep. Liz Cheney, R-Wyo.). This group includes former President Trump and several of his most vociferous, reprobate supporters in Congress and elsewhere. Is it just twisted MAGA contrarianism? Is it traitorism?

You make the call.

Is Donald simply protecting his ability to make scads of money in Russia, which requires Putin’s blessing (and would be traitorism)? Is he supporting one of America’s most dangerous adversaries — excusing the then-imminent invasion of an allied country as “genius” — to ensure the continued repression of the “Golden Showers” video? Which would be traitorism? Yes, his “genius” and “savvy” accolades came (just) before President Putin’s genocidal blitz. But after many weeks of Ukrainian carnage, Mr. Trump, de facto leader of the Republican Party, has yet to walk back his “savvy genius” comments or criticize the Russian dictator’s baleful campaign of slaughter.

Can we agree at least that the GOP Putin Wing’s tacit-or-otherwise support of totalitarian Russian aggression is antidemocratic? Ukraine being a fledgling democratic ally and all?

We certainly can continue to ask the perplexing five-year-old question: What does Putin have on Trump?

2/16/2022 — Russia continues to deny that it’s planning to invade and attack Ukraine.

2/18/2022 — Russia has between 169,000 and 190,000 troops, positioned at Ukrainian borders, in Russia, Crimea, and Belarus (a Russian ally and puppet state), nearly surrounding Ukraine (per American Ambassador Michael Carpenter’s reports from the Organization for Security and Co-operation in Europe).

2/21/2022 — Russian President Vladimir Putin gives a speech espousing irredentist views, questioning Ukraine’s right to statehood, and falsely accusing Ukraine of being dominated by neo-Nazis who persecute its ethnic Russian minority. (— thanks to Wikipedia for “irredentist”)

March 2022 to Date — Russia consistently has been committing war crimes by targeting hospitals and neighborhoods and killing civilians, including women and children obviously trying to flee war zones and the country. Numerous execution-style murders of civilians have been discovered after Russian troops have retreated from urban areas. Rather than hiding these, the Russian army intentionally has left the bodies in the streets to intimidate the Ukrainian people and government. Many world leaders, including American President Joe Biden, now have characterized the Russian atrocities as genocide.

“It may be worth asking yourself, since [this ‘border crisis’] is getting pretty serious: ‘What is this really about? Why do I hate Putin so much? Has Putin ever called me a racist? Has he threatened to get me fired for disagreeing with him?’”

“Why do Democrats want you to hate Putin? Has Putin shipped every middle class job in your town to Russia? Did he manufacture a worldwide pandemic that wrecked your business? Is he teaching your kids to embrace racial discrimination? Is he making fentanyl? Does he eat dogs?”

“Russia’s foreign minister, Sergei Lavrov, has praised Fox News for its coverage, appearing on the Russian state-controlled RT network to hail the right-leaning U.S. cable channel, whose primetime host Tucker Carlson has played down the invasion.

“‘We know the manners and the tricks that are being used by the western countries to manipulate media. We understood long ago that there is no such thing as an independent western media,’ said Lavrov, speaking in English in a studio interview on Friday.

“‘If you take the United States, only Fox News is trying to present some alternative point of view. … But when you watch other channels, read the social networks and internet platforms, when the acting president [Trump] was blocked and this censorship continues in a very big way … Whenever something is happening by the way of mass protest, mass demonstrations — which they don’t like — they immediately call it domestic terrorism. So it’s a war, and it’s a war which involves the methods of information terrorism,’ [Lavrov] said.

“Newsmax host Eric Bolling has urged Fox News’ Tucker Carlson to stop creating fodder for Russian propaganda, telling his former colleague, ‘You’ve gone too far.’ Bolling similarly called out Carlson earlier this month and again criticized the right-wing personality on Tuesday for supporting Russian President Vladimir Putin and his disinformation campaign to justify the invasion of Ukraine. ‘My compadre continues to push falsehoods that Putin and his propagandists are exploiting to show that, yes, some Americans do indeed side with Russia in this war,’ Bolling said.”

“[Vladimir Putin] is a very talented statesman. He has lots of gifts. He was a KGB agent, for goodness sakes. He knows how to use power. We should respect that.”

“[Russian President Vladimir Putin is v]ery shrewd. Very capable. I have enormous respect for him.”

“[President Putin is] very savvy. … I went in yesterday and there was a television screen, and I said, ‘This is genius’: Putin declares a big portion of the Ukraine — of Ukraine — Putin declares [Donetsk and Luhansk] as independent. Oh, that’s wonderful. I said, ‘How smart is that?’ And he’s gonna go in and be a peacekeeper. That’s the strongest peace force — We could use that on our southern border — That’s the strongest peace force I’ve ever seen. There were more army tanks than I’ve ever seen. They’re gonna keep peace all right. No, but think of it. Here’s a guy who’s very savvy.”

“As I’ve said for [a] month — NATO, under direction from the United States, is violating previous agreements and expanding eastward. WE are at fault.”

“Why should Americans have to pay the costs for freedom [in Ukraine] when our own leaders won’t stand up for our freedom here?”

“If we truly care about suffering and death on our television screens, we cannot fund more of it by sending money and weaponry to Ukraine to fight a war they cannot possibly win. … [M]ore arms and more money from America will … prolong the war and magnify human suffering. … I don’t want to be responsible for creating even more refugees and orphans in an already traumatized and dysfunctional world. … It’s not our responsibility to give Zelenskyy and the Ukrainian people false hope about a war they cannot win.”