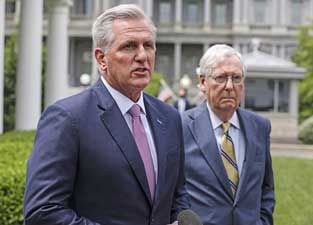 On April 21, 2022, Alexander Burns and Jonathan Martin reported the following in The New York Times:

Then McCarthy tweet-denied the reporting, calling it “totally false and wrong.”

Then investigative reporters produced an indisputable audio recording of the conference call.

We knew from their early public statements that McCarthy and McConnell were highly critical of Trump in the days after the insurrection. We didn’t know that they had made a pact to purge their party and American government of Donald J. Trump. We didn’t know McCarthy was going to urge Trump to resign and McConnell was planning to shepherd the House’s single article of impeachment (“Incitement of Insurrection”) through the Senate for a Trump conviction and preclusion from ever holding public office again. We didn’t know Mitch had told associates, “The Democrats are going to take care of the son of a b*tch for us. … If this isn’t impeachable, I don’t know what is.”

We did know that after being initially appalled with Donald’s attempted coup and Jan. 6 incitement of Capitol violence, Republican leaders flip-flopped like ill-tempered sea bass out of water on the shores of the Potomac. Once they realized that the president could never do wrong in the eyes of his powerful base of supporters, and that anti-Trump Republicans likely couldn’t win their next primary, GOP movers and shakers immediately got back on the MAGA Train and never looked back — and tried to forget what they ever said about Mr. Trump’s crimes and incompetence.

I wrote about this in my book Trumpism: Why Traditional Republicans Should Withdraw Support [2017-2021: A Primer]. Here’s an excerpt.

I used to counsel drug addicts and alcoholics in a former life. This was during the 1990s when the crack cocaine epidemic had not yet produced herd immunity. More than once I heard similar stories about some crackhead taking a hit in the midst of an hours- or dayslong using spree, then falling to the floor clutching his chest, experiencing some sort of cardiovascular event. Whether or not it was a heart attack, the guy on the floor was scared to death. The terrified user invariably would say something in the vein of, “God, please don’t let me die; I’ll never do crack again if I can just pull out of this!”

Also invariably, the previously terrified user would pull out of it, his heart rate would slow back down to 120, and within minutes he’d be back at the table taking another hit on the pipe.

The Insurrection of January 6 clearly was inspired and provoked by President Trump and his people. Eight hundred of Donald’s supporters broke down doors and windows, beat police officers along the way, and occupied the Capitol building for several hours in an attempt to stop Congress from certifying the Electoral College vote for Joe Biden. Many thousands more cheered them on from the grounds. Capitol police and others died as a result. Hundreds of legislators and staffers from both parties thought they might die.

The violent insurrection so transparently was caused and supported by Trump (notwithstanding a couple of late, lame tweets of “We love you, we feel your pain, but be peaceful”) that several of his most sycophantic enablers in the House and Senate had had enough and called out the president:

“[Stopping the vote certification is] not going to do any good. It’s going to delay, and it gives credibility to a dark chapter of our history. … Trump and I, we’ve had a hell of a journey. I hate it to end this way. Oh my God, I hate it. From my point of view, he’s been a consequential president, but today … all I can say is count me out. Enough is enough. … There’s problems in every election. [But] I don’t buy this [conspiracy of fraud]. Enough’s enough! We’ve got to end it!”

“The president bears responsibility for Wednesday’s attack on Congress by mob rioters. He should have immediately denounced the mob when he saw what was unfolding. … Some [including the president] say the riots were caused by antifa. There is absolutely no evidence of that. And conservatives should be the first to say so.”

“The [insurrectionist] mob was fed lies. They were provoked by the president and other powerful people. … They tried to use fear and violence to stop a specific proceeding of the first branch of the federal government which they did not like. But we pressed on. We stood together and said an angry mob would not get veto power over the rule of law.”

“God, please don’t let me die; I’ll never do crack again if I can just pull out of this!” Invariably the terrified user would pull out of it, his heart rate would slow back down to 120, and within minutes he’d be back at the table taking another hit on the pipe.

“I’m going to go down to talk with [Donald] next week, play a little golf in Florida. … I said, ‘Mr. President, this MAGA movement needs to continue, we need to unite the party, Trump-plus is the way back in 2022.’ … [Regarding Trump’s actions on Jan. 6: At] 2:28 he told people to be peaceful, he tweeted out several times. At 4 o’clock he did a video basically to be peaceful and leave. … Did he incite this riot by his speech? Absolutely not.”

“I don’t believe [President Trump] provoked [the Jan. 6 insurrection], if you listen to what he said at the rally. … This president brought a lot of great success … and he should continue to engage in that way.”

[MITCH MCCONNELL:] “The nominee of the party? Absolutely.”

Donald Trump’s provocation of the insurrection is not just an aberrant episode within an otherwise good record of presidential leadership. Trump’s insurrection is the tragic, deplorable culmination of the most corrupt, incompetent, and amoral presidency in U.S. history. Though congressional MAGA addicts might have had a moment of clarity immediately after their lives (and American democracy, itself) were endangered, ultimately they can’t quit the depravity, the crack cocaine of political movements: Trumpism.

Don’t ever believe another word from one of these guys. Like all active addicts, they lie as they breathe.■