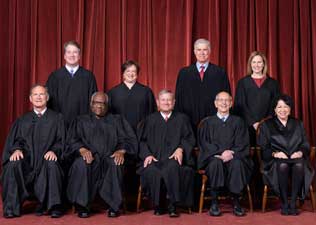 As most people that follow news know by now, SCOTUS is about to affirm the repeal of abortion rights. An unprecedented leak from the Supreme Court has exposed a draft opinion that overturns Roe v. Wade and is supported by at least five justices:

“The Supreme Court has voted to strike down the landmark Roe v. Wade decision, according to an initial draft majority opinion written by Justice Samuel Alito circulated inside the Court and obtained by POLITICO.

“The draft opinion is a full-throated, unflinching repudiation of the 1973 decision which guaranteed federal constitutional protections of abortion rights and a subsequent 1992 decision – Planned Parenthood v. Casey – that largely maintained the right. ‘Roe was egregiously wrong from the start,’ Alito writes.

“‘We hold that Roe and Casey must be overruled,’ he writes in the document, labeled as the ‘Opinion of the Court.’ ‘It is time to heed the Constitution and return the issue of abortion to the people’s elected representatives.’”

One of the primary things to note is that this appears to be the first time in Supreme Court history that a draft opinion — or any significant evidence of internal deliberations before they were announced publicly — has been leaked. The first rule of SCOTUS is you don’t talk about SCOTUS. This includes justices, clerks, clerk assistants, copy editors, sweepers, and pizza delivery guys. In this instance, one of the clerk assistants (or pizza guys) determined that these Court deliberations were so egregious that they had to be exposed. Apparently, POLITICO had a fast food delivery professional or some other source in the right place at the right time.

Point No. 2: Only Rich People Will Have Access to Choice

This point has been well known since the many decades before Roe was decided: You can outlaw abortion, but the rich still will have access because they can afford the travel, accommodations, and treatment for services in another state or country in which female human dignity is still a thing. Or they can afford illegal-but-still-safe services and the potential legal fees that could result.

The leaked opinion bases its validity on, among other things, the fact that the word abortion is found nowhere in the Constitution. Roe is based upon a 1965 SCOTUS determination that there is an inherent right to privacy enumerated in the document. This ruling was the basis for later ensuring the right of all adults to use birth control, engage in “homosexual relations,” and enter into same-sex marriage.

Well, there are many other terms not mentioned in the Constitution: privacy, birth control, homosexual, gay, lesbian, same-sex marriage, internet, Twitter, labor union, motor vehicle, smartphone, gun, assault rifle, surface-to-air missile, euthanasia — you get the picture. All laws and Supreme Court decisions surrounding any of these items and hundreds more had to be derived from some overriding constitutional concept.

Which also applies to a woman’s right to choose.

The current Court has been packed, unscrupulously, to tilt dramatically toward the ideological right. This likely does not stop at eliminating abortion rights.

The importance of the vote never has been clearer. I’m primarily speaking of the political “middle,” which I sometimes endearingly refer to as the “apathetics.” Far-right voters always will vote far right. Critically thoughtful liberals always will vote to support issues of humanity. People in the middle decide the final result. And if those people don’t vote, or don’t perform minimal due diligence in studying the issues before they vote, we get the erosion of democracy.

This is what happens when the electorate doesn’t care enough: