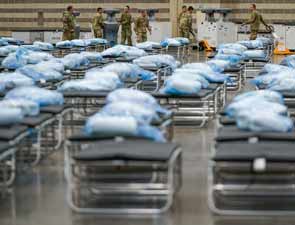 May 4, 2022, produced two related milestones: 1) Trump sycophant J. D. Vance won the Ohio GOP senatorial primary; and 2) the U.S. hit the 1-million mark in COVID-19 deaths. Fox News highlighted the Vance story. But the only mention of the horrifying pandemic marker I could find on FoxNews.com was a seeming criticism of another network’s reporting:

“‘NBC Nightly News’ anchor Lester Holt closed his newscast on Wednesday with a somber monologue about the 1 million COVID death milestone that was just reached in the U.S., but suggested that ‘free will’ is partly to blame for the devastating death toll.

“‘Today’s soul-crushing milestone comes just as we begin to peek out from behind our masks, lower[ing] our guard, willing the pandemic to be over,’ Holt told viewers while showing COVID-era images, including caskets. ‘But the slowly rising tally of the dead won’t let it be and forces us to confront some tough questions like how many of those 1 million deaths might have been prevented. We counted on the tools, the vaccines, the masks, the distancing, but we forgot about the unpredictability of free will, mistrust in science and simple human behavior,’ the anchor said as images of anti-mandate protests appeared on-screen.”

The Fox News headline tacitly mocked NBC’s characterization of the causes of death. But Holt was right. In his journalistic caution, however, he did not go far enough: to specify that former President Trump largely is to blame. Trump instilled in his followers the “free will” to ignore the plague in an attempt to save his reelection. Donald’s depraved pandemic messaging still is causing deaths 15 months after he has left office. MAGA supporters still laugh at pandemic preventive measures as a badge of honor and show of support for Trump and Trumpism.

“President Trump oversaw 400,000 U.S. COVID-19 deaths on his watch, a conservatively estimated half of which were needless. Donald made a conscious choice to play down, ignore, and politicize the pandemic because he believed leading on the issue would hurt his economy, cost him reelection, and remove his presidential immunity from the many financial and legal investigations and prosecutions nipping at his heels. Documentation of Trump’s responsibility for at least 200,000 deaths comes from Columbia University, University of Washington Institute for Health Metrics and Evaluation, National Center for Disease Preparedness – Earth Institute, and former members of Trump’s own White House Coronavirus Task Force.

“The New England Journal of Medicine weighed in on a presidential election for the first time in its 208-year history. In a unanimous statement from its 35 editors, the iconic medical research journal called for the Trump administration to be removed from power for its malfeasance. The detailed evidence is there for the reading.”

J. D. Vance is the future of Trumpism, which now is the Republican Party. But Trumpism kills. The depraved handling of COVID-19 is simply one example of the blueprint to be followed if we don’t kill MAGA in the 2022 and 2024 elections.

I reprise my article explaining the Trumpian homicidal pandemic policies. I celebrated Donald’s defeat in November 2020:

But the work is not finished.■