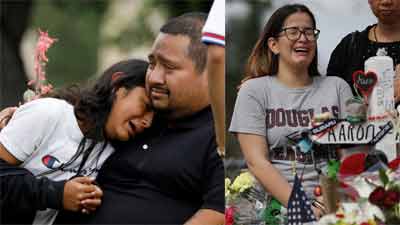 Only Electing Democrats Will Bring the Positive Change Most Americans Want

[FACT:] The only way to stop school massacres and bring about other positive change that a large majority of Americans want is to vote straight-ticket Democratic.

[CAVEAT:] If you have a Dem on your ballot who is an ax-murderer, don’t vote for that guy. Otherwise …

If you think about the primary issues of the day, electing Democrats across state and national legislative and executive office is the only way to solve our humanitarian problems. Because Democrats are the party of humanity. Don’t give me any guff about that party having once supported slavery and fostered the KKK. Liberalism and conservatism have changed party identification over the centuries. Today, as a group, the liberals are Democrats, the party of humanity. Today, conservatives, Republicans, are not.

School (and Other) Massacres

Approximately 100% of Americans want to stop the shooting massacres of elementary school children and other living beings. Even NRA executives want this. There’s just one way to do it: Elect only Dems.

Approximately 90% of Americans want the implementation of universal gun-purchase background checks and other bare-minimum gun-safety laws — laws that do not infringe on 2nd Amendment rights.

Republicans consistently block this. There’s just one way to get universal background checks: Elect only Dems.

Approximately 75% of Americans want women to retain the right to control their own bodies, within reason (viability).

Approximately 65% of Americans want to stop the near-irreversible devastation of climate change.

Approximately 60% of Americans want to curtail the autocratic tendencies and voter-repressing policies of Republican Trumpism, and protect representative democracy.

The 60% know our elections are sound, as determined by every government department and 60-plus unanimous judicial determinations (including two by Donald’s own conservative Supreme Court) during the Trump administration. But Republicans believe they can’t win elections anymore if they’re free and fair. There’s just one way to ensure election integrity: Elect only Dems.

Approximately 72% of Americans want to end the continuous, deadly, inhumane policies and rhetoric that divide the American people.

That is, most people support policies that encourage harmony among citizens. But Republicans consistently use divisive (false) messages to rile their base of supporters and maintain power. There’s just one way to discourage divisiveness: Elect only Dems.

It is Republicans, in the U.S. Senate and across the country, that stubbornly, viciously block these beneficent changes, solely to retain power and be reelected, humanity be damned.

Some Republicans may say they support some of these goals. Most of the GOP will deny these goals are necessary. Thinking people, those that accept reality even when it’s in conflict with personal desire, know most of these goals are imperative to preserving American ideals: our egalitarian way of life and our (true) freedoms, which depend upon a strong and uncorrupted representative democracy.

There’s no way around it. At this point in our history the only way to achieve these goals — humanitarian goals that a large majority of U.S. citizens support — is to elect a multitude of Democrats throughout state and national government.

The Republican Party: the party of death.■