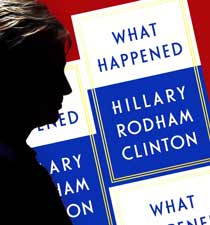 At the 1972 Summer Olympic Games, American Rick DeMont won the gold medal in men’s 400-metre freestyle swimming. Brad Cooper took silver. Later when International Olympic Committee members voted to disqualify the top medalist for using performance-enhancing drugs, they didn’t give the gold to DeMont’s assistant — or his vice president — they gave it to the runner-up, Cooper.

As it should follow with the U.S. presidency. Donald Trump’s campaign soon will be found to have cheated in the 2016 election. Once he is impeached and convicted, or resigns, the presidency should not be awarded to his assistant — or vice president. It should go to the runner-up, Hillary Clinton.

Simon & Schuster released Hillary’s new book, What Happened, Tuesday. Numerous previews and sneak peeks have been published and discussed. By now most news and pop culture consumers know that the book outlines Hillary’s examination and explanation of her 2016 presidential loss.

One of the surrounding subplots is the reporting that many Democrats, including in leadership, rue the book’s release and subsequent book tour because they believe the party needs to move on. They view it as a negative distraction heading into the next election season. They don’t want multiple news cycles dedicated to excuses and sour grapes running into 2018.

But really. What could she do? What would anyone else in her sensible flats do? Almost no one in Hillary Clinton’s position, having gone through what she has gone through, couldn’t not tell her story. (Ooh, a triple negative.) And she did get it out as soon as possible to minimize any negative 2018 effects. The woman has been wronged for 25 years as the target of herculean disinformation campaigns and ridiculous but persistent conspiracy theories. I am sick of constantly hearing the qualifier that she must accept blame for her 2016 loss, too. No one runs a perfect campaign. Of course she must accept some blame.

But so must all close winners, if they were to have lost. Al Franken is a political genius because he beat Minnesota’s 2008 GOP incumbent senator, Norm Coleman, by 312 votes, or 41.99% to 41.98%. If that had been flipped, you don’t think Al would have soul-searched that result to death? You don’t think he would have blamed the Coleman campaign’s DeHumorizer™ (trademarked by Al), which presented many of Al’s old jokes and humorous writings literally, without the Franken irony, and displayed them out of context for maximum damage? And like Hillary, Mr. Franken being an author, you don’t think he would have been compelled to respond to fair-weather fans criticizing him because he couldn’t pull out a measly 312 more votes, thereby costing Dems a filibuster-proof Senate?

Unlike most other election losers (here it comes), Hillary won more votes — about 2.86 million more. Have you heard about that!? A change of only 77,000 or so votes (about 0.6%) in the Midwest would have given her the College — 77,000 votes out of 13 million cast in three key states. And you can multiply that unfair DeHumorizer™ handicap by a hundred.

A presidential campaign is extremely complicated, and those in leadership make strategy decisions based on what they know at the time. I’m fed up with hearing she should have gone to Michigan, Wisconsin, and Pennsylvania. Now that we know Russia was helping Donald, and after FBI Director James Comey’s misguided reopening of email-gate at the eleventh hour, a hundred trips to the Blue Wall might not have made a difference.

In legislative and legal theory there exists a concept called the reasonable person:

“[A reasonable person is] someone who uses such qualities as attention, knowledge, intelligence, and judgment which a society requires of its members to protect their own interests and the interests of others.”

“The reasonable person knows that ice is slippery, that live wires are dangerous, that alcohol impairs driving ability, and that children might run into the street when they are playing.”

Donald Trump said repeatedly during the campaign that Hillary “doesn’t have the stamina” and “she just doesn’t look presidential.” The reasonable person knows this was his way of reminding us constantly that his opponent was a woman, the same way he reminded everyone regularly in 2012 that Barack Obama is Black (and probably born in Kenya). And for those sexist or closet-sexist men (and some women), Trump’s dog-whistled digs at Hillary’s gender tugged at their bias. Trump told us — through these and a thousand other examples — who he is. A reasonable person knows Donald Trump is a sexist who’s not afraid to use his sexism and to fight dirty in other ways.

The Trump campaign and administration has sought to hide all their many contacts with Russia. They mendaciously denied their numerous meetings with Russian emissaries. When discovered, the administration repeatedly told more lies to explain those meetings away. When the FBI investigation was getting warmer, President Trump fired the director to stop “this Russia thing.” A reasonable person knows that for some reason Donald Trump is trying desperately to hide all-things Russia from the American people.

More of “This Russia Thing”

With or without the Trump campaign’s help, we now know that Russian-backed actors disseminated and promoted a tremendous amount of Hillary Clinton disinformation. We’ll never know how many votes were swung. But a reasonable person knows it was a significant number.

With or without the Trump campaign’s help, we now know that Russian-backed actors hacked Democratic National Committee and Clinton campaign staff email accounts and leaked unimportant but embarrassing internal communications — the types of communications any political campaign has and would want kept private. The funny thing is they also hacked the Republican National Committee but only leaked Democratic emails. A reasonable person deduces this effort was coordinated to help the Trump campaign.

Eleven days before Election Day, Hillary was up by double digits in the polls, then FBI Director James Comey wrongly reopened her email server investigation. By Election Day eve, though vindicated, she was down to a lead of low single digits. A reasonable person can see the late-campaign Comey actions cost Clinton a significant amount of votes.

Brad Cooper ultimately got the Olympic gold medal he deserved. Now it’s almost time to give Hillary the presidency. A reasonable person can see that if you eliminate the cheating and FBI mistakes, she won. After eight months of Trump in office, we know that competence, intelligence, maturity, experience, and integrity count for something. And Donald has realized he can’t build a successful administration on a steady diet of narcissistic prevarication and reality-show shenanigans. Did I mention he’s dangerously incompetent?

OK, the presidency is not a gold medal. When Donald Trump ultimately is forced out of office due to obstruction of justice, collusion with Russia, financial corruption, criminal nepotism, felonious narcissism, or plain old incompetence (25th Amendment?), Vice President Mike Pence will be our president. If Pence is too tied to the Trump mess, House Speaker Paul Ryan will be the guy. Either one will be a poor choice but still miles above President Trump.

Let’s expedite the inevitable. Contact your legislators and tell them a reasonable person would be calling for President Trump’s resignation.■