“Trumpism Without Trump”: Going Down Like Trumpism WITH Trump 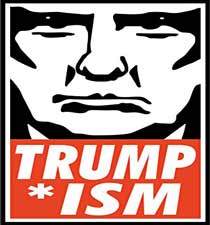 [After Democrats win big in Virginia and elsewhere: MAGA hats for sale — cheap]

“Ed Gillespie worked hard but did not embrace me or what I stand for.”

“This is a coalition of the decent that rose up yesterday.”

Here’s a rundown of some results:

Note that the Utah U.S. House seat is rated one of the most Republican in the country, so that loss by Democrat Kathryn Allen was virtually predetermined.

(data courtesy of Hohmann, James; “The Daily 202: Anti-Trump Backlash Fuels a Democratic Sweep in Virginia and Elections Across the Country”; The Washington Post; 11/8/2017.)

The morning after Tuesday’s gubernatorial election in Virginia, there was much discussion about losing Republican candidate Ed Gillespie’s attempt to embrace “Trumpism without Trump.” That was the catchphrase throughout the media landscape after the closely watched race. Gillespie’s campaign tried to walk the line between promoting the worst elements of Trump’s policies — anti-immigrant fervor, save-the-Confederate-monuments demagoguery, “some very fine people on both sides” white nationalism — and actually being seen with The Donald himself.

It didn’t work. Democratic, Republican, and nonpartisan pundits are calling Tuesday’s result a clear repudiation (and refudiation — thanks to Sarah Palin) of Trump, the man, as well as what he stands for. Democrats swept the state in what former Virginia GOP congressman Tom Davis called “an old-fashioned thumping.” And Democrats surprised the president in many other cities and districts across the country with mayoral, city council, state representative, and state senatorial victories.

In classic Trump-alicious fashion, just minutes after the race was called for Gillespie’s opponent, the president tried to distance himself from his previous push for Ed, tweeting, “Ed Gillespie … did not embrace me or what I stand for.” Trump desperately wants us all to forget that he strongly endorsed Gillespie, repeatedly praised Gillespie, urged voters to turn out and vote for Gillespie, and recorded last-minute, full-throated Trumpian fearmongering robocalls in support of Gillespie.

Did I mention that President Trump went all in for the loser, Ed Gillespie?

Virginia had its largest voter turnout in an off-year election in 20 years. Democrats were fired up to defeat Donald’s policies and send a clear message to the president. His humbuggery about Ed Gillespie not embracing him enough is clearly one of the main components of Trumpism — mendacity — that voters rejected. Pundits on both sides agreed that Virginia’s election results were a referendum on the president. They speculated that had Trump campaigned in Virginia for Ed Gillespie (as President Obama did for Democrat — and winner — Ralph Northam), Northam’s victory margin could have been bigger. The overall results shocked Republicans. And Democrats, who won more races, by larger margins, than they had dared to hope for.

After special election defeats earlier this year, especially in Georgia’s 6th congressional district, Democrats were disheartened, discouraged. But there’s nothing like a wave election in your favor to wash away discouragement.

Mike Huckabee is a staunch supporter of Donald Trump. The former Arkansas governor’s daughter, Sarah Huckabee Sanders, is the president’s stalwart, if abrasive, press secretary. Huckabee Sr. represents the Christian far-right wing of Trumpism, even though Donald hasn’t been in a church since his baptism, and his Bible still has the cellophane wrapper on it. (I stole that last one, from whom I can’t remember.) I include these palate-cleansing Mike Huckabee quotes to illustrate further Trump’s racist, xenophobic, Christian-pandering, slave-to-the-NRA, public-school-prayer-would-prevent-massacres policies:

“It’s time to wake up and smell the falafel.”

“We ask why there’s violence in our schools, but we’ve systematically removed God from our schools. Should we be so surprised that schools have become a place of carnage? Because we’ve made it a place where we don’t want to talk about eternity, life, what responsibility means, accountability. … People say, Why did God let it happen? God wasn’t armed. He didn’t go to the school. But God will be there in the form of … hugs and with therapy. … Maybe we oughta let him in on the front end, and we wouldn’t have to call him to show up when it’s all said and done on the back end.”

I’ll bet it was a comfort to those first-graders’ Christian parents that their children were sacrificed to put God and prayer back in our schools. Mike went on the Fox News airwaves and said this before the families could even identify their innocents’ bodies. Gov. Huckabee, you are a despicable Christian hypocrite. I wonder what Jesus would have done.

In the fight against the Trump doctrine, two very important events have developed in the past few weeks: Tuesday’s elections and Bob Mueller’s indictments.

Add to this the president’s colossal incompetence, deceit, and immorality. (Other than all that …)

Until recently, it was not clear where the Russian investigation was going, if anywhere. But special counsel Robert Mueller’s first indictments, dropped Oct. 30, 2017, have brought his work into crystal-clear focus, especially for Trump’s inner circle. We now have strong indication that new indictments will rise higher and wider into that circle. In my opinion, there is a likelihood the president ultimately will resign to avoid impeachment.

Some of my fellow liberal, anti-Donald friends are of the mind it would be best to ride out the Trump presidency for four years because Vice President Mike Pence would be more dangerous: Pence’s policies are every bit as deplorable as Trump’s, and Pence has the political savvy to actually get his through Congress.

But my thinking is to get The Donald out ASAP for the following reasons: 1) He really could prompt an attack (and subsequent war) by North Korea through his dangerous schoolyard taunting of Kim Jong Un or some other unstable despot; 2) Trump’s downfall, as soon as possible, is imperative to defending truth — truth is under the severest presidential attack in modern times; 3) Once Trump is brought down, Pence and Republicans will be vastly weakened and disgraced; and 4) Democrats will take back one or both houses of Congress in 2018, which will thwart any attempted Pence-ian affronts to (our representative) democracy. At least, that’s what I believe.

President Trump’s policies and beliefs about America have been rejected in significant, official referendums for the first time since his inauguration. Before this week, speculation had it that the Trump doctrine was weakening in popularity. Record-low polling approval ratings have indicated his influence was waning. But, as politicians often say, the only poll that matters is the election — in this case, elections. Every indication is that Trumpism, with or without Trump, is on its way to defeat.

Granted, this was only one cluster of off-year and special elections. And Democrats could underperform in 2018 — in which case I’ll eat my “Make America Great Again” hat. But what do you call a wave election in 2017?

Quotes of the Week

“Korean golfers are some of the best on Earth. In fact — and you know what I’m going to say — the women’s U.S. Open was held this year at Trump National Golf Club in Bedminster, New Jersey.”