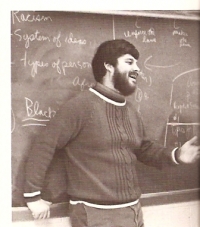 My ninth grade social studies teacher, Gerry Eggen, was a fierce liberal in his late 20s. He had a strong passion for teaching and waking up junior high school minds. Even conservative classmates — among those few peers who hitherto had thought about politics enough to place themselves somewhere on the political spectrum — said that though they didn’t generally agree with him, he “made you think.” Per my first book dedication to his memory: “Mr. Eggen taught us the difference between The New Republic and the National Review, and why we should care.

Eggen encouraged us to invite political and social issue activists from the Greater Detroit area into our classroom to speak. These speakers ranged in political temperament from far right to center to far left. Students were assigned to contact personalities, convince them to come, and handle all the scheduling and logistics. Not only were we learning about the important issues of the day, we were gaining valuable “adulting” experience like making business telephone calls and completing meeting arrangements.

Our ninth grade class under the leadership of Mr. Eggen became a bit of a legend at all-white Fuhrmann Junior High School, situated in a Macomb County second-tier Detroit suburb. Word got around. Teachers and students from other classes began attending many of our speaker presentations, sometimes to the point of the classroom overflowing.

“Lobsinger has been a mainstay of reactionary conservatism in Michigan for years. In the 1960s he started Breakthrough, a pro-Vietnam War, anti-civil rights group that wasn’t exactly shy about its staunch opposition to all-things lefty. …

Mr. Lobsinger also made headlines during the first years of the New Detroit committee, formed in the aftermath of the 1967 Detroit Riot to find solutions to racial tension:

When we had him speak at Fuhrmann Jr. High in 1968, Lobsinger was in his prime. He probably was the incendiary highlight of the school year. Students and teachers were lined up down the hall trying to hear his pitch. Mr. Eggen normally didn’t inject himself into speakers’ presentations but this one was different. My lasting memory of that day was the anti-communist, protector-of-white-rights Donald Lobsinger and the flaming liberal Gerald Eggen sarcastically wrapping up the event after squaring off during the Q&A exchange at the end of the talk:

[DONALD LOBSINGER:] “But I’m not calling you a communist” (said in the way the speaker really believes you’re a communist).

[MR. EGGEN:] (smiles) “Well I’m not calling you a fascist” (said in the way the speaker really believes you’re a fascist).

Yes, Mr. Eggen woke up sleeping adolescent minds. Our final grade depended largely upon a school-yearlong assignment to write a paragraph on our thoughts about each of a large collection of lofty sounding “Thinking Statements.” Here are some examples:

“Sneering at one’s ‘inferiors’ gives them an immediate superiority over you.”

“Most people believe what it pays to believe, and hardly anyone will accept an idea that jeopardizes his security or threatens her self-esteem.”

While hanging out after class one day, Mr. Eggen asked a few of us if we were having trouble with any of the statements. I mentioned the one I was stuck on: “Man’s inhumanity to man.” One of my friends, Nick O., spouted off, “What!? That one’s easy!” He proceeded (condescendingly) to give me numerous examples of how humankind has mistreated its own members, such as the history of wars throughout civilization (just and unjust), slavery, the Holocaust, and so on.

OK, I finally got it (and wrote a heck of a paragraph). How could I be so thick? On the other hand, why aren’t today’s ninth graders writing paragraphs about thinking statements? At least I learned about “man’s inhumanity to man” by my last year in junior high.

We should rework this statement to read, “Humankind’s inhumanity to humankind.” Granted, it doesn’t roll off the tongue with the same ring as the old version. But equality and progress must march forward, helped along by congresspersons, chairpersons, servers, and mail carriers.

Occurrences of man’s inhumanity to man live on today, sadly. One of the most visible examples is the current American president, Donald Trump. For the past week, writers have written about the barbaric results of Trump’s zero-tolerance illegal immigration policy, which until last week included separating migrant children from their parents at the border as an intentional deterrent.

I guess those children have been deterred sufficiently. Trump showed them. These two-, five-, and eight-year-olds will not be busting across the border again anytime soon.

You’ve heard the stories: the 10-year-old girl with Down syndrome being led away from her mother, crying so hard she vomited; the young boy who was stopped from jumping out of a second-story window because he misses his parents after a monthslong separation; the mother feeling like she’s “going to die” from worry after two months with no word from her 14-year-old son also in custody somewhere.

Man’s inhumanity to man does not comprise only killing. Separating families is straight out of the slavery and Holocaust playbooks. Exacerbating its soulless barbarism, the Trump administration has exhibited serious incompetence in tracking family members and planning for reunification. It also has shown a callousness and lack of concern about reunification efforts. The only thing that changed President Trump’s migrant-separationist mind was public shaming, public outrage, which normally doesn’t faze him. But this time the national ire swamped the support from his base that he usually counts on and threatened his political standing.

Mr. Trump’s authoritarian leanings are a serious threat to American democracy and our allied relationships. How is it possible that 40% or so of the electorate so thoroughly has been fooled? Even if they like the racism and nativism, his economic policies are sure to hurt most of his base — to whom he blatantly has lied — while the Trumps continue to profit (unethically and illegally) from the presidency. Additionally all Americans are hurt by Trump’s obsequious subordination to Vladimir Putin.

You know the situation: the Trump campaign cheated to win the election by soliciting and enabling support from a foreign adversary (additionally many experts believe Putin likely is blackmailing our president with potentially damaging kompromat); Trump consistently lies to his supporters, pitching numerous false promises and conspiracy theories; he’s enriching himself through the presidency; and he’s thoroughly corrupt. (I guarantee these things ultimately will be proved.) Now he has succeeded for the past two months in tearing apart immigrant families, to maintain power by pandering to his xenophobic base of support.

The president has just gotten a boost from the Supreme Court’s 5-4 ruling that upheld the third version of his Muslim — I mean, “travel” — ban, even though it was based clearly on religious bigotry. Many legal experts expect this ruling to go down in history alongside Dred Scott v. Sandford, Plessy v. Ferguson, and Korematsu v. United States.

President Trump wants to eliminate due process of law for migrants who have crossed the border illegally or are seeking asylum. This violates the Fifth and 14th Amendments to the U.S. Constitution. It also threatens immigrants who are fleeing their countries in fear for their lives.

Donald Trump has no moral compass, no humanitarian sensibilities. His assault on (mostly non-Caucasian) humankind inevitably will get worse, as it does for all power-mad, narcissistic aspiring autocrats who use their office to enrich themselves and their families.

In 2006 Donald Lobsinger resurfaced to run for a seat on the Macomb County (yes, that Macomb County) Board of Commissioners:

“They say that I attack black people. That is absolutely not true. Anyone who has attended [commission] meetings [I’ve spoken at], if they were honest, they would have to say none of my remarks have been directed toward black people. My purpose has been to reply to attacks on this county and its majority white population by the Ministerial Alliance, NAACP, and the Black Democrat Caucus. By being a member of that board, I would be in a better position to counter these attacks by black-power racial agitators. …

“I’m going to make it a point to be a voice for the white victims of Macomb County. I will be a voice for the majority white population against black racist agitators. I believe I am speaking for one heck of a lot of people in this county.”

As Donald Trump would say, there were “some very fine people on both sides — on both sides” — of that argument.

In 2006 it might have been easy to assume that since Lobsinger lost his bid to be a Macomb County commissioner, this was evidence that racist inhumanity could never win out in 21st century America.

This nation needs many things. But the most important thing it needs is to teach students to grow up as critically thinking adults. Where are the Mr. Eggens and the thinking statement assignments in American middle and junior high schools? Why were 40% or so of the U.S. electorate — those who still support Trump after he has shown us clearly who he is — apparently never taught to think in ninth grade, 11th grade, whenever?

On Wednesday Supreme Court “swing-vote” Justice Anthony Kennedy announced his retirement effective July 31, 2018. This will give President Trump his second pick for the high court.

If ever there were a time for critically thoughtful, caring patriots to mobilize and stand up to an autocratic, plutocratic leader and his invertebrate, cowering congressional majority, it is now.■