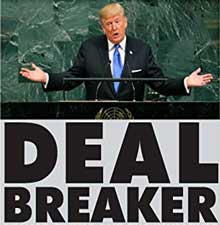 ~SUMMARY~
[FACT]: Virtually all racists support Donald Trump over Joe Biden. I’m not saying President Trump is a racist. Draw your own conclusion. Now consider Donald’s “pro-life” people who want to repeal Roe v. Wade at the expense of everything else. [FACT]: The abortion issue comprises people of high moral standing and integrity residing in both factions. So how can abortion prohibition — pro or con — be a presidential deal-breaker? There are many fine people, on both sides. On both sides. A deal-breaker is allowing needless post-born pandemic deaths. A deal-breaker is the policy-driven emotional torture of 5,400 migrant children, 6-year-olds wailing for their parents. MAGA supporters, please tell me about the “very fine people on both sides” of these issues. The U.S. accounts for 4.3% of Earth’s population but 22% of world COVID-19 deaths. You do the math. Mr. and Ms. Trump Supporter, you can claim not to believe any of this “fake news.” But that’s simply classic denial from an addict. That’s the closet racist averring “all lives matter.” I would want Trump out if he were a pro-choice Democrat and Biden were a pro-life Republican. Abortion prohibition, pro or con, is not a deal-breaker when American democracy is at stake. If, however, emotional torture of children and needless loss of post-born life AREN’T deal-breakers for you, we’re done talking. My mental health depends on it. But I’ll miss you. (scroll down for full article)

(Ersin, Tom; “Pandemic Deaths Due to Trump Malfeasance: 68,709 – so Far”; GraniteWord.com; 7/16/2020; as conservatively extrapolated from COVID-19 Dashboard by the Center for Systems Science and Engineering at Johns Hopkins University; 9/3/2020.)

I’m not using this to assert that President Trump is a racist and white supremacist. Draw your own conclusion.

But I’ll now address the remaining bulk of “Make America Great Again” supporters who deny any racist, white supremacy connection, be it overt or covert. I speak of Donald’s “pro-life” apostles and apologists whose single-issue support rests on their desire for more conservative judges and repeal of Roe v. Wade at the expense of everything else.

[FACT]: The abortion-rights-versus-abortion-prohibition issue comprises people of high moral standing and integrity residing in both factions.

Many sincere people of faith oppose abortion on the grounds that all life is sacred. And many other sincere people of faith believe that after careful consideration, within certain reasonable guidelines, and after consultation with her doctor, a woman’s right to control her own body is just that: her right. Both camps can find biblical references or absence of references to support their argument. This philosophical debate has raged since medical science developed the abortive procedure and made the ability to choose an issue.

Therefore I have difficulty understanding how the issue of abortion prohibition — pro or con — can be a presidential deal-breaker. There are many fine people, on both sides. On both sides.

A deal-breaker is the indiscriminate allowance of post-born American pandemic deaths.

A deal-breaker is the policy-driven emotional torture of migrant children.

MAGA supporters, please step up and identify yourselves as being on the Trumpian (wrong) side of those issues. Please tell me about the “very fine people — on both sides.”

I don’t hate Trump supporters, some of whom are dear friends and family members. I don’t think they’re stupid. How can many of them be stupid and still earn college degrees and respectable or even high incomes? I am, however, desperately trying to figure them out. They have some kind of blind spot, are under some kind of mass hypnotic hold from which they can’t break free.

They need an intervention, a deprogramming. And I’m just the guy to help them because I care about Trump supporters — unlike those other weak-on-crime, anti-law-and-order, throw-money-at-the-problem radical Biden sots.

Child Separation to “Set an Example”

Donald has separated some 5,400 migrant minors — including babies, toddlers, and other young children — from their parents for months, locking them up in squalor, 6-year-olds wailing for their mothers and fathers, causing lifelong-lasting trauma. The non-profit Physicians for Human Rights (PHR) has determined that this trauma constitutes torture. Hundreds of these children have been separated permanently through government incompetence — immigration authorities failed to track their whereabouts. And Mr. Trump continues to push this barbaric, inhumane policy, while illegal immigration has been at its lowest levels in decades.

The adults who brought their kids might have broken laws, though most are legal asylum seekers. Either way, the vast majority simply were desperate to save their families. But the children are innocent human beings, put through the horror — the torture — of losing their parents in a strange land, not knowing if they’ll ever see them again, so the president could “set an example.”

Donald has caused tens of thousands of needless deaths by consistently, still, playing down the coronavirus and spreading dangerous misinformation to restart the economy early, solely for reelection, to avoid near-certain indictment. My conservative estimate of lives lost due to Trump corruption and incompetence is half of the current 186,000 U.S. pandemic deaths. The United States — with the greatest health care research expertise in the world — accounts for 4.3% of Earth’s population but 22% of world COVID-19 deaths. You do the math.

From the beginning, he’s refused to nationalize health guidelines, testing, treatment supply production, and the supply chain. He’s demanding all school districts reopen without limitations at the height of a pandemic, without any guidance, threatening their funding if they don’t. He’s risking the lives of thousands more children across the country for political gain. And he’s crushed CDC and FDA independence and bastardized their public guidelines.

The president did institute a porous (40,000 Chinese still were allowed to enter the U.S.) travel ban in late January. Contrary to his claims of bold action, however, he simply was catching up to what the rest of the world was doing. Since the ban, Trump has sabotaged virus containment efforts by squandering lead time provided by the European preview, issuing false assurances and solutions, ridiculing near-universal medical recommendations, suppressing data, and discrediting his own top infectious disease experts.

Believe It or Not

Mr. and Ms. Trump Supporter, I guess you can claim not to believe any of this, that’s it’s all “fake news.” But that’s simply classic denial from an addict, your blind spot. That’s the cigarette junkie with COPD claiming the butts “relax” him. That’s the active alky justifying that she can’t have a problem because she never drinks alone, only drinks beer, or still has her good job. That’s the closet racist averring “all lives matter.”

By the way, I still would do everything in my power to defeat Mr. Trump even if he were a Democrat vehemently supporting a woman’s right to choose and Joe Biden were a Republican vehemently vowing to repeal Roe v. Wade. Abortion prohibition, pro or con, is not a deal-breaker when the rule of law, American democracy, and American decency are at stake.

[FUN FACT]: Donald’s near-universal support from white supremacists was NOT a deal-breaker for his ostensibly non-racist supporters.

If emotional torture of children and needless loss of post-born life aren’t deal-breakers for you, we’re done talking. My mental health depends on it. But I’ll miss you. ■