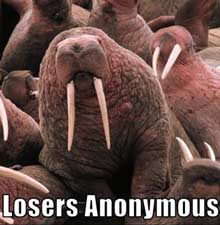 “[Donald Trump] just needs to go to Losers Anonymous. Like, he’s really in a psychosis right now. … [T]he people around him like his daughter, like Jared Kushner … I think that they need to stage some sort of intervention at this point.”

Damn. “Losers Anonymous.” That should have been my line, my snarky metaphor, being a former alcoholism counselor and all.

(I know: The kinder, gentler terminology these days is “substance use disorder,” but I’m a tough-love guy. I refuse to coddle alcoholics — or losers — with watered-down diagnoses that avoid “labeling” them. You got labeled when you groped the boss’ wife in a blackout at the office holiday party. And you got labeled when the American people said, “Thanks, but no thanks” to a second term.)

Besides being vengefully funny, the Losers Anonymous analogy has many parallels to where Donald finds himself now.

An alcoholic doesn’t know he’s an alcoholic for the first major portion of his adult life. Eventually, after part of him knows, the larger part won’t admit it until he hits his “bottom,” if he ever does.

Denial — Not a River in Egypt

Donald has been a loser throughout his adult life. He just didn’t know it. We’ve learned his father raised him with a rigid-but-false version of loserism. Essentially, Fred taught his son that showing any of the common characteristics of humanity — empathy; kindness; emotional vulnerability; self-reflection; ability to apologize, admit mistakes and losses — made one a loser. By his father’s metric, Donald steadfastly avoided loserism. By any other standards, Donald has always been — a loser.

Like any good alkie, Donald had great enablers propping up his loserism. He claims to be a self-made billionaire, receiving only a $1 million loan from Dad early in his career, which he purportedly paid back. In fact, Donald inherited at least $413 million dollars, through manipulating his dementia-afflicted father’s will, cheating siblings and other heirs out of rightful inheritance, and using likely illegal tax dodges. And before his mind went, Fred often bailed out Donald’s financial collapses with unpaid-back loans, essentially covering up the failures, the losses.

Had Donald simply left his money in mutual funds, his current net worth would be exponentially more than it is. In other words, he’s a failed businessman. Through the lessons learned from his father — lying, denying, obfuscating, never admitting, never apologizing — Donald has covered up every financial and business bust he’s experienced. And there have been many (Remember Trump Steaks? I didn’t think so), to the point that, not only is he likely not a billionaire anymore, he probably has massive personal debt that could drown him.

Donald fooled the other 49 states with the constant covering-up of his losing. But his home-state New Yorkers knew, especially the New York business and society elite. To them, he was always a loser, and part of him knew it. Now Donald has experienced his biggest loss ever: being one of the few U.S. presidents to lose reelection after a first term. The people said, “Thanks but no thanks” to rehiring the guy.

You might think this would be Donald’s bottom. You would be wrong. He’s now attempting to cover up even the un-cover-up-able.

Once more, many people thought Mr. Trump wouldn’t respond to a loss in the worst destructive way — in this case, by subverting American democracy through baseless election result protests, challenges, and wild conspiracy theories. Wrong. He’s claiming fraud with no evidence and destroying faith in our electoral system, at least among his 74 million voters. Why? At first, he psychologically could not accept the defeat, the loss. Now, ultimately, continuing the non-acceptance is 1) making him money through fundraising (by conning his working-class supporters) and 2) setting him up for future endeavors (i.e., cons).

Un-American? “Who cares.” Damaging democracy? “Not my problem.” Hurting our country and its citizens for years to come? “Screw them — It’s helping me.”

One more time, Trump has no bottom. He has no Losers-Anonymous-12-Step bottom, one that might provoke him to seek help for his devastating disorder. And he has no bottom, no nadir, for narcissistic depravity — he can always go lower in the quest to help himself even if at enormous cost to everyone else.

So Trump continues to bespoil the integrity of American democracy while the courts consistently shut him down.

“Free, fair elections are the lifeblood of our democracy. Charges of unfairness are serious. But calling an election unfair does not make it so. Charges require specific allegations and then proof. We have neither here. … The campaign’s claims have no merit. … And it never claims fraud or that any votes were cast by illegal voters.”

This opinion from the Third Court of Appeals sums up the near-40 court challenges the Trump campaign has made — and lost — to election results in battleground states where Trump fell short. But the lame-duck president has demonstrated he’ll never give up the lie, as illustrated by this vicarious message sent through his TV attorneys:

“The activist judicial machinery in Pennsylvania continues to cover up the allegations of massive fraud. We are very thankful to have had the opportunity to present proof and the facts to the PA state legislature. On to SCOTUS!”

In the meantime, like any self-respectable confidence artist, he doesn’t let little things like truth and patriotism get in the way of making a buck, especially with an available pool of 74 million marks. Consider this recent fundraising email from the Master Grifter, himself:

I can’t defend this Election alone… I need YOUR help.

Making sure we have enough resources to protect the integrity of this Election is critical; especially when the Left and Fake News media are working overtime to try to STEAL IT.

This is it, Friend. This is where we step up and show the Democrats that REAL Americans want a FAIR and TRANSPARENT Election.

Please contribute $45 or MORE in the NEXT HOUR and you can increase your impact by 1000%.

I know I can count on you, Friend.

My team is sending me the FIRST list of donors soon and I’ll be looking for your name. Make sure I see it.

Please contribute another $45 RIGHT NOW to get on the list and to increase your impact by 1000%.

Donald Trump is sucking dry the poor working class bastards that hang on his every word. He’s raked in $170 million so far. This money isn’t going to “FAIR and TRANSPARENT Elections.” Most of it is going straight into Mr. Trump’s coffers, to be used for future cons. But you’ll want to make sure he sees “your name” on that “FIRST list of donors.”

The Thing That Wouldn’t Leave

Mr. Trump has indicated he won’t attend his successor’s inauguration, as virtually all presidents have done since George Washington. This always has been a tremendously important symbolic event, demonstrating America’s commitment to peaceful transfer of power through free and fair elections.

Mr. Trump is making lots of money off his refusal to accept defeat. He’s setting himself up to maintain control over the consistently obsequious, sycophantic elected Republicans who have never spoken up, never let him down. To their discredit, they’re deathly afraid his influence over voters could end their career. And to them, career and power trumps everything — integrity, honesty, humanity — everything. Donald will maintain control of Trump Republicans through the threat of a 2024 run and by likely establishing a far-to-the-right-of-Fox-News media empire.

As one pundit put it, the only thing worse than death to the galactically, pathologically narcissistic Trump is irrelevance.

And as I say, there is no bottom to Mr. Trump’s depravity in his quest to avoid irrelevance and enhance self-dealing. Not massive preventable pandemic death. Not active subversion of American democracy. No bottom. ■