“No Collusion” Claim Blown out of Water by GOP Senate Report 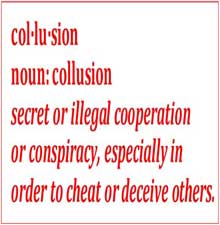 ~SUMMARY~
The Senate Intelligence Committee Tuesday released the long-awaited last installment of its report on Russian involvement in corrupting the 2016 presidential election. The committee is majority-controlled by Trump Republicans. The report blows Trump World’s mendacious mantra of “No collusion” out of the water, into the upper atmosphere, then far into the heartland of the contiguous United States. In a Trump Republican nutshell, the GOP Senate’s final word says the MAGA campaign solicited, welcomed, accepted, used, benefited from, and vigorously covered up illegal Russian help to win the election. It tiptoed as close as humanely possible up to the line of American illegality without crossing it — that we know of. But the report confirmed there were myriad essential reasons and sufficient evidence for the FBI to investigate the 2016 Trump campaign for traitorous breaches of national security. Trump Republicans said that. (scroll down for full article)

(Ersin, Tom; “Pandemic Deaths Due to Trump Malfeasance: 68,709 – so Far”; GraniteWord.com; 7/16/2020; as conservatively extrapolated from COVID-19 Dashboard by the Center for Systems Science and Engineering at Johns Hopkins University; 8/20/2020.)

“[There was] a breathtaking level of contacts between Trump officials and Russian government operatives that is a very real counterintelligence threat to our elections.”

“collusion: secret agreement or cooperation especially for an illegal or deceitful purpose”

The Senate Intelligence Committee Tuesday released the long-awaited last installment of its near-1,000-pages-total report on Russian involvement in corrupting the 2016 presidential election. The committee is chaired by Sen. Marco Rubio (R-Fla.) and majority-controlled by Trump Republicans.

The report blows Trump World’s mendacious mantra of “No collusion” out of the water, into the upper atmosphere, then far into the heartland of the contiguous United States. In a Trump Republican nutshell, the GOP Senate’s final word says the MAGA campaign solicited, welcomed, accepted, used, benefited from, and vigorously covered up illegal Russian help to win the election. It tiptoed as close as humanely possible to the line of American illegality without crossing it — that we know of. But the report confirmed there were myriad essential reasons and sufficient evidence for the FBI to investigate the 2016 Trump campaign for traitorous breaches of national security.

Sen. Rubio and other Republicans on the panel attempted to soften the news-cycle blow to the president by misrepresenting (i.e., lying about) what their own report says, in the apparent hope that the public won’t read it or believe verbatim quotations in the lame-stream media.

If any other commander in chief were in office — or if the electorate were not currently shell-shocked, exhausted, and completely numb to Donald’s numerous, massive lies and outrages — the president would be resigning the day after this report’s release. It goes beyond the Mueller Report (which itself would’ve forced any other president’s resignation) with damning revelations of presidential perjury and high-level campaign contacts with a Russian agent to whom confidential high-value polling information was passed multiple times.


The Report Speaks for Itself

I’ll tell you what: Let the August 18, 2020, “Report of the Select Committee on Intelligence, United States Senate, on Russian Active Measures, Campaigns, and Interference in the 2016 U.S. Election, Volume 5: Counterintelligence Threats and Vulnerabilities” speak for itself.

“Despite Trump’s [lack of] recollection, the committee assesses that Trump did, in fact, speak with [Roger] Stone about WikiLeaks and with members of his campaign about Stone’s access to WikiLeaks on multiple occasions. … [Stone] obtained information indicating [Clinton campaign chief] John Podesta would be a target of an upcoming release, prior to WikiLeaks releasing Podesta’s emails on October 7. Stone then communicated this information to Trump and other senior campaign officials.”

“The committee found evidence … [that] WikiLeaks was knowingly collaborating with Russian government officials. … WikiLeaks actively sought, and played, a key role in the Russian influence campaign and very likely knew it was assisting a Russian intelligence influence effort.”

Candidate Trump repeatedly expressed his support for WikiLeaks at rallies and press conferences during his campaign: “WikiLeaks — I love WikiLeaks!” “This WikiLeaks is like a treasure trove.” “WikiLeaks, it sounds like, is going to be dropping some more.” “Boy, I love reading those WikiLeaks.”

The report states that immediately after the infamous Access Hollywood outtake video (in which Donald said of women he’s attracted to: “I just grab ‘em by the p***y”) was released to the press, Roger Stone, through an intermediary, told WikiLeaks to “drop the Podesta emails immediately.” They were “dropped” 30 minutes after the video’s media release. The dump of thousands of private emails was extremely damaging to the Clinton campaign and distracted the day’s news away from Trump’s caught-on-tape disgusting misogyny.

Trump campaign chair Paul Manafort’s passing of confidential material to a Russian agent was a “grave counterintelligence threat.” Manafort’s partner and Russian contact, Konstantin Kilimnik, was part of “a cadre of individuals ostensibly operating outside of the Russian government but who nonetheless implement Kremlin-directed influence operations. … Kilimnik is a Russian intelligence officer … who may have been connected to the GRU’s hack and leak operation targeting the 2016 U.S. election,” the existence of which is beyond dispute.

President Trump has attempted to divert the (true) Russian pro-Trump election interference story to a (false) Ukrainian pro-Clinton election interference story. This has been debunked by all credible U.S. (and other) intel sources then and now. It’s been long-known that this narrative originated with Russian agents, including Konstantin Kilimnik, and had been perpetuated by Trump campaign chair Paul Manafort. Russian President Vladimir Putin even told a version of the whopper to Trump. Many Trump Republicans have continued pushing this propaganda long after being warned by the intelligence community that they were doing Russia’s bidding.

“The committee has determined that this theory espoused by Kilimnik and Manafort … that the Ukrainians were responsible [for U.S. election interference], not the Russians … has no factual basis.”

Without presenting evidence that Putin definitely has kompromat on Donald Trump, the report devoted a lot of ink to Russia’s kompromat-harvesting methods and activities, and hinted at the possible existence of such black-mailable material.

“The committee found that the Ritz Carlton in Moscow [where Trump is reported to have hired two prostitutes] is a high counterintelligence risk environment. The committee assesses that the hotel likely has at least one permanent Russian intelligence officer on staff, government surveillance of guests’ rooms [including hundreds of security cameras], and the regular presence of a large number of prostitutes, likely with at least the tacit approval of Russian authorities.”

Additionally, the report states Trump likely had several relationships with Russian women starting in the 1990s.

“The Trump campaign publicly undermined the attribution of the hack-and-leak campaign to Russia [the truth of which is beyond dispute] and was indifferent to whether it and WikiLeaks were furthering a Russian election interference effort.”

But the Republican-led committee, along with its Democrats, all signed off on this spine-chilling conclusion:

“What happened to the United States in 2016 should be an alarm bell for the nation. … Russia is actively interfering again in the 2020 U.S. election to assist Donald Trump, and some of the president’s associates are amplifying those efforts. … The Russian intelligence services’ assault on the integrity of the … U.S. electoral process, and Trump and his associates’ participation in and enabling of this Russian activity, represents one of the single most grave counterintelligence threats to American national security in the modern era.”

“We can say, without any hesitation, that the committee found absolutely no evidence that then-candidate Donald Trump or his campaign colluded with the Russian government to meddle in the 2016 election.”

“We can say, without any hesitation, that the committee found absolutely no evidence that its Republican members know how to use a dictionary.”

(one political observer, including Tom Ersin, of GraniteWord.com; accompanying statement to report; 8/18/2020.)

“[The report] unambiguously shows that members of the Trump Campaign cooperated with Russian efforts to get Trump elected. This is what collusion looks like.”